A Memory of Two Mondays 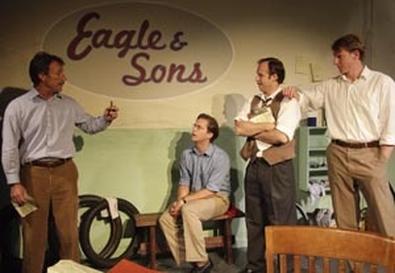 Photo Source: Agnes Magyari
At the climax of Arthur Miller's autobiographical portrait of the artist as a young man, authorial stand-in Bert muses on the ironies of the daily grind during the Depression. "I don't get it," says the college-bound youth. "How is it me that gets out? …Oh, there ought to be a statue in the park, To All the Ones That Stay." It's the heart-piercing peak of an unbroken series of mesmerizing moments that compose the superb revival at Ruskin Group Theatre.

First produced in 1955 as companion to the one-act version of "A View From the Bridge," this memory play is marred by its author trying to say too much in too little time. That's hardly a fatal flaw—not when set against the force of Miller's sociological observations (the play could not be more topical) and layered subtext, which director Amelia Mulkey's pristine staging lands with remarkable economy. Transforming the venue into the dingy shipping/receiving area of a Brooklyn automotive parts warehouse, courtesy of set designer Cliff Wagner, Mulkey nails the tricky mix of realism and impressionism. She makes effective use of Mike Reilly's subtle lighting, and the recurrent mechanistic sounds—tapped fingers on a chair, metal coffee cup, pencil on a desk—are inspired, supplied by a dream cast.