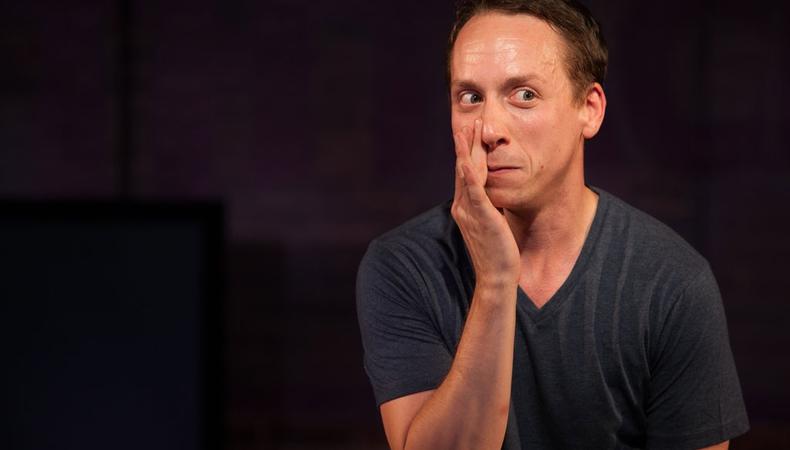 The most affecting moment in Steven Strafford’s solo show “Methtacular!” is a show-tune smile that betrays desperation. As he sings the titular final line of “Lose Yourself,” an original song about the escapist pleasure of a methamphetamine high (written by Strafford and Wade Elkins), the look on his slack face, the held vowel sound, and the slow dimming of the lights present a man crying for help.

The revelation lasts only a second. “No more feelings, please, more jokes” is Strafford’s mantra as he dips from one rock-bottom anecdote to the next. In a peculiarly ingenious way, the very neurosis that drives Strafford to his meth and sex addictions also fuels his monologue about the experience: namely, his penchant for disavowing insecurities with high-octane pleasure. Strafford’s performance is a schizophrenic’s star turn, in which a scared little boy who loves Angela Lansbury and 1980s sitcoms fights for stage time with an angry, righteous hedonist who craves sex parties and reviles responsibility. A hyperactive actor at once afraid of his audience and at home onstage, Strafford carefully choreographs this internal duet until at the play’s heartwarming conclusion a third figure emerges: the confident stage magician who uses art, not drugs, to face the truth.

To complement the dual personalities of its central character, “Methtacular!,” which is smoothly directed by Adam Fitzgerald, balances two conceits. The first is to tell the story as a comic vaudeville, in which each episode is presented as an entertaining bit or scene, sometimes in front of a sparkly pull curtain, often with original music (arranged by John McDaniel). Twice Strafford brings patrons onstage for a game show that gives him the refreshing opportunity to go off script and play with the audience directly. Throughout he earns the exclamation mark in his play’s title.

The second conceit is to present a tale of homelessness and emotional exile as a living-room drama. David L. Arsenault’s set—an urban apartment with a small table, a smaller chair, two short bookcases, and a flat-screen television—has the onerous duty of representing the domicile of every drug-swindling lover or bathhouse bedroom in which Strafford finds temporary solace. A tease of stability and unconditional love appears in video footage of his mother describing her fear of her son’s decline. After Strafford finally finds his way home, he speeds awfully quickly through the vagaries of his recovery. Perhaps it’s the journey through the dark woods, not the long crawl to safety, that interests him most.

“Methtacular!” offers little in the way of surprise. Testimonials of drug addiction and recovery are contemporary consumer culture’s slave narratives, repeating ad infinitum the story of a road through hell and rise to redemption. Strafford sticks to formula, but his charming stage presence and emotionally rich song-and-dance-man style make for a refreshingly fun and poignant ride.