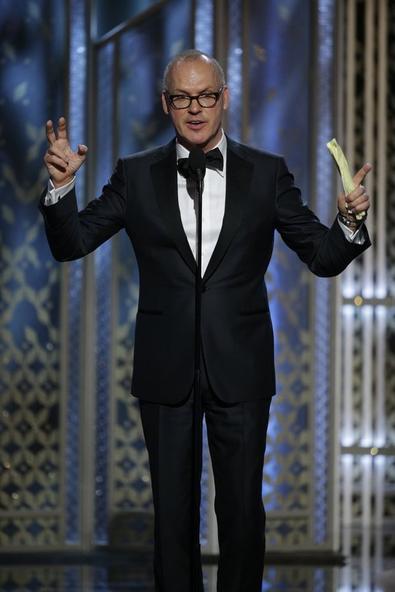 Michael Keaton edged closer to his first Oscar when he climbed the stage at the 72nd annual Golden Globe Awards in Beverly Hills on Sunday.

After winning best actor in a comedy for his performance in “Birdman,” Keaton will now be considered a favorite to claim a statue at the Academy Awards next month. Matthew McConaughey completed a similar Globes-Oscars sweep last year when he twice won for his role in “Dallas Buyers Club.”

Still, Keaton will have competition in the form of Eddie Redmayne, who took home the best actor statue in the drama category for this performance as physicist Stephen Hawking in “The Theory of Everything.” (The Academy Awards don’t have the some division between drama and comedy for best acting honors.) Among female performers in film, Julianne Moore and Amy Adams split the honors, winning for "Still Alice" and "Big Eyes," respectively.

Other Oscar frontrunners include Richard Linklater, who won a best director Golden Globe for “Boyhood.” The slow-cooked film—shot over a dozen years with the same performers—also won for Best Motion Picture, Drama. Meanwhile, “The Grand Budapest Hotel” received the same award in the comedy category. “Selma,” the Civil Rights-era drama, went one-for-four in its nominated categories — winning only for Best Original Song - Motion Picture.

Meanwhile, Keaton’s victory—and his emotional acceptance speech where he touched on his hardscrabble upbringing in rural Pennsylvania—were among the milestones of a night that saw Amazon Studios gain critical recognition for its series “Transparent” and Gina Rodriguez win for her performance on CW’s “Jane the Virgin.”

“Transparent” creator Jill Soloway dedicated the win for best TV series to Leelah Alcorn, the transgender teen who recently committed suicide in Ohio. Jeffrey Tambor, who won best actor in a TV comedy for playing Maura in the series, thanked the “transgender community.”

“This is much bigger than me,” Tambor said.

It capped a big night for Amazon Studios, which has seen “Transgender” turn into a breakout hit. Rival streaming service Netflix could only boast one win Sunday, with Kevin Spacey taking home the award for Best Actor in a TV Series, Drama for his role as Frank Underwood on “House of Cards.”

Rodriguez’s win for Best Actress in a TV Series, Musical or Comedy for “Jane the Virgin” was perhaps the upset of the night. She beat out Julia Louis-Dreyfus, Edie Falco, Lena Dunham, and Taylor Schilling for the honor.

“This award is so much more than myself; it represents a culture that wants to see themselves as heroes,” Rodriguez said in her acceptance speech.

Best Animated Feature Film
How To Train Your Dragon 2

Best Actress in a Mini-Series or TV Movie
Maggie Gyllenhaal, The Honorable Woman

Best Actor in a Motion Picture, Drama
Eddie Redmayne, The Theory of Everything