How Michelle Williams Found the Heart of Marilyn Monroe 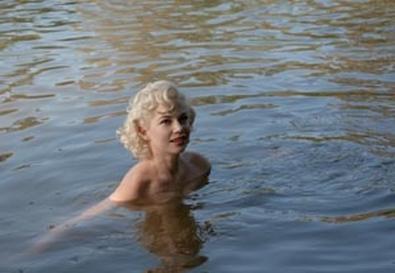 Michelle Williams never dreamed she'd play Marilyn Monroe. Nor did she think anyone would ever ask her to play the screen icon. But director Simon Curtis did, for his film "My Week With Marilyn," about a young man Monroe had an intimate relationship with while filming "The Prince and the Showgirl" in 1956.

Williams says the role came to her in "the normal boring route—an agent and a script." But after reading "My Week With Marilyn," she was anything but bored. She developed a deep connection to the material, and the part instantly ignited her imagination. "What I've learned about acting and about picking parts is you should only do it if your whole heart leaps at the opportunity," Williams says. "If you're like, 'I just have to have that; I won't be satiated until I play this,' that's the only time you should really say yes. I didn't set out with any expectations about the piece of material. I didn't know what I wanted to do next. I wasn't looking to make a career move or play something I'd never played before. It was just an innate response to the material."

Here, Williams tells Back Stage about her journey in bringing the iconic star to the screen.

Back Stage: Where did you start in trying to find your character?

Michelle Williams: I started for this movie in a way I've never started for a movie, which is from the outside. I think it's because I knew I was going to have the furthest to go there. I'm a human, so I can understand pretty much any human experience or emotion—or at least I hope to, or that's what my job is to try and do. But physically, she and I are very, very different. I had to remake my body in her image, which was hard. It's taken 31 years to get me and my body to this place, and I had to basically unmake it or break it in six to eight months. That's a lot of conditioning to work against.

Back Stage: What was that process like for you?

Williams: I watched [her] movies and started trying to break apart, trying to figure out what she was doing, trying to figure out basic patterning inside her body. Things started to become clear upon repeat viewing. I started to realize things about her posture—like she had a balloon attached to her breastbone, her chin was up, her nipples were pointed out, her back was slightly arched, her knees were slightly together, almost like somebody was tying something around them. I started to try, at first, to just get one of these aspects. Like, first try and walk with your knees together in high heels. Once I felt comfortable doing that, I would add a swivel in my hips. Once I felt comfortable doing that, I would picture a balloon attached to my breastbone and my nipples pointed out and then I would put my chin up, and I would try and integrate each of these things. It was a slow process of things slowly becoming clear, then trying to add them all together, and then eventually making them seamless.

Back Stage: Was there a moment where you thought, "I think I've got her"?

Williams: That moment evades me at every turn, on every job. Marilyn is not exclusive to feeling like your character is within your grasp and then suddenly it was somehow outside your grasp. There wasn't a moment where she became a fixed point in space, where I was just like, "Oh, I can call up Marilyn Monroe and she's there for me." A few things would come clear for me. I remember when I ran up to Simon and I was like, "I think I have her walk!" But then the next day, I was like, "Where did it go? I just had it. What happened? Why can't I do it?" It was an evolving, frustrating, exciting relationship—which makes it like a real relationship. My relationships with my friends or my partners or anybody are always surprising, because the other person is alive and changing and transforming. I felt similarly about this because I was still getting to know Marilyn Monroe. She was always being added to in my mind. It felt like it kept it real, it kept it exciting, it kept me always wanting to know "me."

Back Stage: Did you stay in character between takes?

Williams: Yeah, I did a lot. That's helped me throughout the years to be able to sustain something. It's just building up muscles for it. You worry about being obnoxious—like, I didn't go home as Marilyn Monroe. I think also, when you're making a movie, you want to have a happy environment, and you want to be building up good relationships with the people you're working with, so I am slightly conscious of not alienating people. I would stay in it when I felt like it suited me, and if I felt like I was getting comfortable, then I could drop out of it.

Back Stage: What's your best advice for actors who have to play a real person like Marilyn?

Williams: I asked somebody the same question—an actor I'd worked with once before whose work I admire so much. When I was thinking about taking on this role, I sheepishly reached out to him and said, "Do you have any advice?" Because the best thing to do when you don't know what you're going to do is to ask somebody who has been there before. He said to me, "If there's even a whiff of the icon, things get much less interesting." I puzzled over what he meant—how could you not play the icon when you are playing an icon? Then, what I interpreted it to mean is to not fill up every moment with the icon. To remember, first and foremost, they're human beings just like you and me. I hate to dispel the myth, but Marilyn Monroe was human.

Williams originally asked director Simon Curtis to audition her for the part. "I'm used to getting jobs through auditioning for them and feeling like I can do it because the director or somebody said, 'Yes, you can,' " she explains. "To take this kind of a risk, I wanted to know somebody other than me thought I could do it." Because of time limitations, however, she ended up accepting the role.

Is playing the role of Glinda in Sam Raimi's "Oz: The Great and Powerful," scheduled for release in March 2013

For her role in "My Week With Marilyn," Williams earned a Spirit Award nomination for best actress.