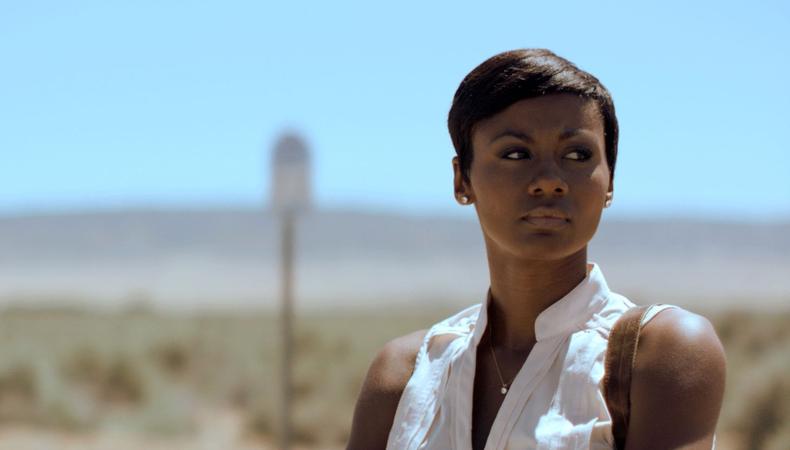 Most people haven’t heard of Emayatzy Corinealdi yet, but that’s about to change with her stunning lead performance in the Sundance hit “Middle of Nowhere.” The film, which plays the Toronto International Film Festival beginning Sept. 12 and will hit U.S. theaters Oct. 12, tells the story of Ruby, a young woman who drops out of medical school when her husband is sent to prison on an eight-year sentence. Writer-director Ava DuVernay became the first black woman to win the Best Director prize at the Sundance Film Festival for the film, which was shot in 19 days on a shoestring budget.

“Middle of Nowhere” marks a major breakthrough for Corinealdi. Appearing in her first lead role in a feature film, she delivers a beautiful, complex performance of a woman in transition. The actor, an Army brat who has lived everywhere from Germany to Kansas, says the critical raves for the film have already changed her career. “There’s definitely been a difference since Sundance,” she says. “There are casting directors and producers I’ve got to meet and opportunities that are before me as a result of being in a film that was written so beautifully, with this amazing character for me to play.”

As for her unique name: her father combined the name of a princess named Yatzy from his native Panama with his mother’s name, Emma, to come up with the moniker. It’s a name that anyone who sees “Middle of Nowhere” won’t soon forget.

How did the role of Ruby come to you?
Emayatzy Corinealdi: It was just an audition. I was sent in by my agent to audition for Aisha Coley. I was auditioning for the role of the sister. At the end of the day, Aisha said, “Here are the sides for Ruby, take a look at this,” which completely made my day. I had read the script and loved Ruby, but was sure they already cast her.

This is your first lead role in a film. Was that intimidating?
Corinealdi: Once I let go of the daunting thought that I placed upon myself of having to memorize the whole script at once, I said, “Okay, this character is the lead in the film so you have to know who she is, what she’s doing, and what she’s fighting for.” I really had to discover who she was, and that made the path to everything else a little easier.

Prior to this film, was there a particular role you really felt was a breakthrough for you?
Corinealdi: One of the roles I hold really close to my heart is a small “under-five” role I did on “The Young and the Restless.” I think I did about four episodes and it meant so much to me, simply because it was my mom’s all-time favorite soap. From the moment I decided I wanted to be an actress, she always said, “Emayatzy, you have to be on ‘Young and the Restless!’ I just know you are, you’re going to meet Victor!” So to have that come true was amazing. I actually did get to meet Victor [played by actor Eric Braeden], and I told him all about my mom.

In your career, has anyone ever advised you to change your name or take a stage name?
Corinealdi: When I first moved [to L.A.], I think it was an acting teacher who said I should just go by Emayatzy. I feel like that’s for Cher and Madonna. It just didn’t feel right. Not long ago someone said I should shorten it to just Emma. But I really, really love my name. From as far as I can remember, my parents have taught me to be really proud of my name.

The film has been getting amazing feedback. Have you received praise from any actors you particularly admire?
Corinealdi: That would have to be Angela Bassett. She hosted the premiere at the L.A. Film Festival. Just for her to do that was amazing. I’ve always wanted to meet her. So for her to introduce the film, I was already on cloud nine. Then she sat next to me at the screening! I had her on one side, my dad on the other side. And after the film she just looked at me and said, “You, young lady, are a fine actress.” It really was a dream.