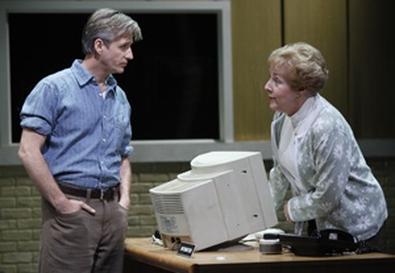 Everyone in Will Eno's "Middletown" seems to have gotten his or her philosophy of the world from fortune cookies and taken an overdose of antidepressants. From the suicidal handyman to the weird cop to the antisocial mechanic to the cheerful librarian, the residents of this fictional Everytown converse in simplistic homilies while moving through David Zinn's minimalist set like tranquilized mental patients. The play wants to be a modern "Our Town" as filtered through a Beckettian existentialist lens. But rather than focus on the beauty of everyday lives, as Thornton Wilder did in his timeless 1938 work, or wryly laugh at mankind's ineffectual strivings, in the manner of Beckett, Eno has his characters jabber endlessly and obviously about Big Issues like Birth, Death, Happiness, and the Meaning of Life.

The playwright has created an allegorical suburb full of lost souls wandering its tree-lined streets in search of fulfillment. John (Linus Roache), the depressed handyman, fills his time with hobbies and books on obscure topics. He makes a connection with newcomer Mary (Heather Burns), whose husband is perpetually away at sales conferences. The two assuage each other's loneliness while a slightly menacing policeman (Michael Park) delivers cryptic pronouncements, a somewhat deranged outcast (James McMenamin) rummages for drugs and companionship, and a former astronaut (David Garrison) recalls his encounter with the vastness of outer space—because the play is about the meaning of the whole universe, get it? The first act concludes with a superpretentious and unnecessary segment that has five actors playing members of the audience discussing the play during intermission. The second act moves to the town hospital—mortality, did you get that?—and Eno concludes by hitting us over the head with twin symbolic mallets: The pregnant Mary delivers her baby alone, while on the other side of the stage John expires of infections from self-inflicted wounds. One is born while one dies; the cycle goes on. How ironic! Yawn.

It doesn't help that director Ken Rus Schmoll stages the proceedings at a glacial pace and has the cast deliver the boring dialogue at such an even, monotonous level that I could barely keep my eyes open. It's telling that the only two members of the relatively large (for Off-Broadway) cast to hold our attention are sitcom and musical veterans Garrison ("Married With Children") and Georgia Engel ("The Mary Tyler Moore Show"). Through expert timing and delivery, these two performers can make a seemingly ordinary line resonate with meaning or elicit a laugh of recognition. Playing multiple roles with admirable ease amid the heavy-handed surroundings, Garrison is particularly moving as a lighthearted doctor offering advice on parenting to the anxious Mary. Engel employs the ditsy-but-adorable persona that made Georgette Baxter such a beloved TV favorite to humanize the eternally optimistic librarian. The rest of the ensemble are unable to make relatable people out of the one-dimensional abstractions Eno has given them.

Eno caught a lucky break when his "Thom Pain (based on nothing)" got a rave from The New York Times and was nominated for the Pulitzer Prize. He is capable of creating searing images and insightful details—"No more pretty shoes by the door" is how John heartbreakingly describes his divorce—but the less-than-middling "Middletown" fails to live up to his potential.