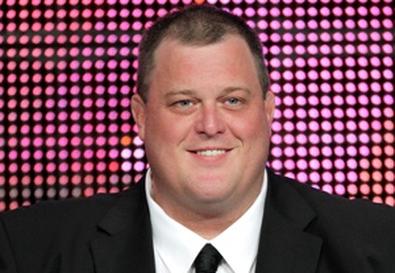 While the new sitcom "Mike & Molly" spins around two single people who hook up at an Overeaters Anonymous meeting, the stars and creative team insist the show isn't about being fat. Instead, they say, it's about people who happen to be fat.

And yet, with two overweight principals heading up a series produced in thin-obsessed Hollywood, can they avoid the discussion of weight?

Throughout summer, a blast of major media outlets did stories about what one Los Angeles Times columnist dubbed the current crop of "pound-power" shows, narrative series with plus-sized leads, including "Drop Dead Diva," "Huge" and, now, "Mike & Molly," which the actors were discussing with reporters at the Television Critics Association press tour in late July.

"The questions feel a little bit like Hollywood is going, 'Are there fat people out there where you come from?'" joked actor Billy Gardell, who plays Mike.

"Mike & Molly" is the brainchild of Mark Roberts, working again with Chuck Lorre ("Two and Half Men"), who serves as an executive producer.

"When Mark and I started out on this process, Mark mentioned 'Marty,' the Ernest Borgnine film," Lorre recalled about the story of a heavyset, lonely man seeking love. "That touched both of us, and the poignancy of people that might have given up hope that they'll ever find someone."

The casting call for the character of Molly asked for "a sweet-faced, overweight woman in her 30s," according to Roberts. "I ended up seeing just about every other woman who's been in any kind of production of 'Hairspray,' but Melissa (McCarthy) was the first piece of tape we saw.

"With women of size," Roberts said, "a lot of times there's often an overly apologetic nature to their being, or there's a too-rambunctious, sort of Chris Farley (thing). ... But she was just a person. She was just a sweet, lovable, funny woman who wasn't uncomfortable with herself."

"Sure, I'd like to lose some weight," noted McCarthy, who was eight-and-a-half months pregnant when she auditioned. "And I plan on taking some of the baby weight off. But it doesn't make everything in the world crumble. I think I'm OK."

Previously, McCarthy, 40, and Gardell, 41, were seen in the periphery, as supporting players on such series as "Samantha Who?" and "My Name Is Earl."

"I'm used to being the guy that comes in, you say something funny, you move the scene along, you're out of the way," Gardell said. "So, with this, I get to act. You get to really have moments. You're not only funny. You're not always the butt of the joke. You're driving the story.

"I would hope that if this show does anything, it's not going to start a trend of 90 shows about fat people, because that's not what we're about," he said.

"But if it starts a trend of putting people with different kinds of flaws that are real on TV, I think everybody will breathe a sigh of relief."