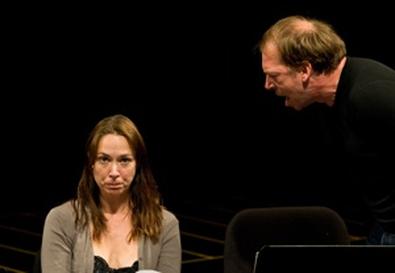 Photo Source: Howard Korn
Director, writer, and classical scholar Bryan Doerries suspected that the Greek tragedies "Ajax" and "Philoctetes" by Sophocles would have profound resonance for returning service members and their families, not to mention survivors who had lost loved ones in combat. But he didn't anticipate the intensity of the response.

Doerries certainly didn't expect his New York–based company, Theater of War, to be tapped by the Pentagon last November to receive $3.7 million in order to visit 50 military sites nationwide. A rotating company of actors reads three scenes from each drama, and the performance is followed by a panel discussion and a town hall meeting with the audience. "The first time we did this, we planned 45 minutes with the audience," Doerries recalls. "It went on for three and a half hours."

Many name actors have participated, including Jeffrey Wright, David Strathairn, Paul Giamatti, Jesse Eisenberg, Charles Dutton, Keith David, Jay O. Sanders, Bill Camp, and Elizabeth Marvel. "We have between 40 and 50 actors, 80 percent of whom have Broadway, film, and TV credits," says Doerries. "They do two performances on one day, but if travel is involved they usually commit themselves to three days. There are also one or two rehearsals. The actors get paid, but when you realize some of these actors are giving up TV and film to do this, at the end of the day their payment is an honorarium. Still, the opportunity to do something meaningful with your craft is not as frequent as you might imagine."

Theater of War requires actors with a social consciousness and classical chops. "They cannot be strangers to classical texts," Doerries says. "And having a military background is a plus."

Adam Driver, who frequently works with Theater of War, agrees. During his Marine Corps training, he was not deployed to Iraq or Afghanistan because of an accident. But his military background has given him a leg up, he says, and no major leap of imagination is required for him to understand the plays or his roles. As a member of the chorus in "Ajax," he fully grasps how frustrating it is to communicate with the title warrior, whose battlefield experiences define him. Collectively, the chorus is an outsider. Driver likens its feelings to his own at a funeral for a serviceman who had committed suicide: The soldiers present had served with the deceased and felt a special bond with each other and a quality of grief that Driver did not share.

He also knows what it's like for Neoptolemus, his character in "Philoctetes." "He has been left behind and has a lot to prove," Driver says. "That resonates with me. I felt I had service left in me that I didn't have a chance to explore." He explains that his work with Theater of War is filling that gap.

Similarly, Marvel, a practicing Quaker, says performing with Doerries' company is "service in its purest form. It's been a great experience for me because I'm in a world so totally separate from the military. But I've not wavered in my pacifism. If anything, it's strengthened my resolve."

Marvel's husband, actor Bill Camp, comments that Theater of War has given him an opportunity to "be of service while utilizing my theatrical skills. It's bridging a gap between entertainment and actual relevance. It has an immediate impact and people respond."

Still, there are numerous challenges, most significantly performing high-stakes Greek drama, which requires a style so different from the low-key, realistic acting that American actors are most comfortable with, Camp says. It's even more challenging because the actors are seated throughout the performance and all the feeling has to emerge vocally. The acting is in the style of a radio play, fast-paced and emotional, notes Doerries.

Further, because the house lights are on during the reading, the actors are keenly aware of the audience as a judging presence, regardless of its size. "Sometimes you're facing 500 Marines who've had multiple deployments, and other times it may be 15 military personnel and their families," Camp says. "And many of these audiences are not theatergoers, and that's intimidating. Their expectations are low, and sometimes it's mandated that they attend. It requires that much more of a willingness on our part to leap into the work."

But the payoff is palpable. Camp recalls the father of a serviceman who had committed suicide approaching him after a reading to say he was grateful for the performance, because now he understood what may have been going on in his son's mind, citing a parallel between Ajax's torment and his son's.

Marvel recalls the wives of service members coming up to her, "holding my hands, thanking me, crying. Instead of the usual PowerPoint presentations that they usually get, they said I was mirroring their experiences in front of them. It's always an emotional tsunami."

Doerries says some of that intensity stems from the service members and their spouses realizing they're not isolated: "I remember two women who stood up and said, 'My husband killed himself, just like you described, just like Ajax.' They spoke with relief." He adds, "A Vietnam vet who saw the performance said the fact that post-traumatic stress disorder existed in B.C. [before Christ] made him feel less alone."

"People say, 'I know Ajax. I am Ajax,' " says Driver, who adds that the work has been healing for him as well. The plays give voice to feelings that are rarely articulated, especially in a military environment, he says, and the articulation is the healing.

The three actors explain that Theater of War has brought them face to face with people whose lives might otherwise be completely alien to them. The exposure has broadened their palettes as artists and as human beings. Camp sees a connection between the experiences of service members and those of actors, both of whom are terrified to ask for help and of failure.

Doerries views Theater of War as part of a larger movement and is already expanding what he dubs his "transmedia social-impact company" into prisons and medical schools. He is convinced that classical theater can address the moral and emotional crises faced by the medical establishment and by corrections, parole, and probation officers. He has presented scenes from Aeschylus' "Prometheus Bound" to prison personnel and relevant scenes from "Philoctetes" to doctors and hospice workers specializing in palliative care for the terminally ill. For Doerries, "It begins with theater, community, and empathy, and then it radiates out."

For more information on Theater of War and upcoming productions, visit www.theater-of-war.com.