Mireille Enos Makes a 'Killing' in Her Role 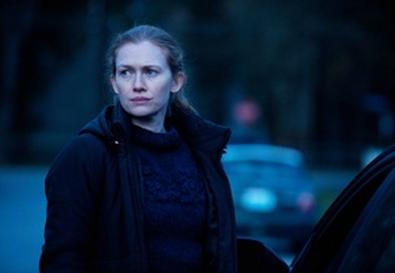 Photo Source: AMC
Darkness continually descends on Sarah Linden, the beleaguered but savvy cop portrayed by Mireille Enos on AMC'S "The Killing," now in its second season. Linden is a taciturn homicide detective who must navigate the lies and alibis of many potential suspects with sordid histories -- not to mention constant torrential rain -- as she tries to solve the murder of local Seattle teen Rosie Larsen. An ever-uglier custody battle with her ex-husband and an estranged relationship with her fiancé only serve to weigh down her personal life as well.

All of this baggage couldn't be further from the welcome turn of events Enos' own life has taken in the last several years, both personally and professionally. Like a beacon of light emerging from the darkness, "The Killing" reminds the actor just how lucky she is.

Based on the Danish series "Forbrydelsen" (which translates to "The Crime"), "The Killing" was an instant hit. With 2.7 million viewers, its pilot was AMC's second-highest-watched original series premiere, after "The Walking Dead," and the show quickly developed a rabid fan base. Enos credits the show's strength to developer Veena Sud, herself a graduate of crime procedurals. "The material is excellent," Enos says. "The truth is, terrible things like this happen all the time, and we're trying to represent it as honestly as we can."

She also praises Sud and the writers for keeping the focus on the ongoing investigation into the Rosie Larsen murder. "There's so much crime on TV, and it impersonalizes the victim," she says. "Procedural shows have a new victim every week, and they don't show the ripple effects of that person's absence; it's easy to be desensitized. Veena attempts to show the ramifications of the crime."

That's all well and good, but last season's finale caused a minor uproar when viewers waiting for Rosie's killer to be revealed learned they would have to keep watching to find out. "I was so surprised by the reaction," she says, still a bit stunned by the backlash. "It was so baffling to me. I think cliffhangers are a fantastic writing device. All I heard was that the audience was loving these characters and their stories, and it seemed so obvious to me that you'd want Sarah's and Rosie's stories to keep going longer."

Enos says that the story line in the second season should hook viewers right back in. "It was so clear that we needed more time to wrap the story up," she says. "The red herrings are gone, and all the new information is pertinent."

While reaction to that cliffhanger was mixed, the consensus on Enos' work has been uniformly positive. She received Emmy and Golden Globe nominations for the first season of "The Killing." "It was really great," she says of those accolades, "to get that sort of acknowledgment for the first year of the show. There's so much great TV being made and so many fantastic women on TV in the last couple of years."

The acclaim that "The Killing" has brought is far from the only blessing in her life. She and her husband, actor Alan Ruck, have an 18-month-old daughter named Vesper. She spends five months of the year away from her Los Angeles home to film the show in Vancouver, but her husband and daughter come with her.

"I've been part of a lot of special things lately," Enos says. "The last few years have been off the charts."

While Enos is certainly appreciative of her success, it is the result of a patient career that gradually saw dividends come from her hard work. After studying at Brigham Young University, Enos spent a decade in New York, appearing on Broadway in "The Invention of Love" and later earning a Tony nomination for her role as Honey in the 2005 revival of "Who's Afraid of Virginia Woolf?," a role she also played in London's West End.

"After that, I looked for a change of scenery," she says, "and went back to L.A. to hunt down TV work. I wanted to get training in front of the camera to see how that felt and educate myself about it." Before long, Enos was cast in the dual role of twins Jodean and Kathy Marquart on HBO's "Big Love," a vital learning experience for her. "Sometimes you have to play it safe on shows," the actor says, "but this role was the perfect size. I had wiggle room. It wasn't so huge that I couldn't take risks."

By the time the leading role of Sarah Linden came calling, Enos was ready. "I wasn't intimidated to take on ‘The Killing,' " she says. "It was a really good fit. Because I know that AMC makes good television, I trusted that I was in a place that was going to support us. There are smart people all around me."

Enos says that despite the show's ultra-dark tone, she is able to separate work from life. "On set we're very fond of each other," she says. "There's actually lots of laughter."

Still, one question remains: How does she handle all of that fake rain?

"The rain is perfect for the show. I love the way it ends up looking," Enos says. "But it is tough to be in that rain. It helps me to get in Sarah's head, though. It became so obvious how hard it is for her to get comfortable. There's no comfort in her life."

Fortunately, her portrayer has all the comfort she could want right now.

- Enos grew up in Houston, where she attended the High School for the Performing and Visual Arts.

- Husband Alan Ruck is best known for work in "Ferris Bueller's Day Off" and "Spin City."

- Enos is a member of The Church of Jesus Christ of Latter-day Saints, just like the charcters she played on "Big Love."