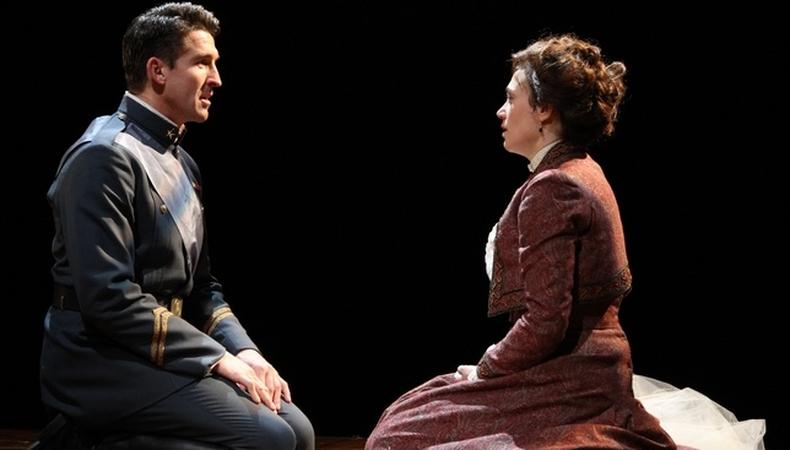 Jonathan Cake has been preparing to play Benedick in William Shakespeare's "Much Ado About Nothing" since he was 9 years old. He even earned trophies for his performance.

"I would compete against other snotty nosed young kids for trophies doing speeches of Shakespeare," says Cake, chatting before an evening performance at the Duke Theater, where Theatre for a New Audience's "Much Ado About Nothing" is currently playing. "I won quite a lot, I have to say, which is a terrible grounding in acting. I had a whole side port full of acting cups. It's just the worst way to try and figure out how to do some acting."

Cake is winning again with his critically-lauded portrayal of Benedick opposite "Sons of Anarchy" star Maggie Siff as Beatrice in the Bard's famous battle of the wits. Cake was last seen on the New York stage in the Broadway revival of "The Philanthropist" in 2009."

"It always feels very uncomfortable when I don't do a play for a while," Cake says. "I just feel like something's not right."

What attracted you to this play?
Jonathan Cake: Shakespeare attracted me by writing this extraordinary play. Can you believe this play, really? There are so many aspects of it that are so extraordinary. I played the part in university when I was 20 years old, and I have some vague sort of completely self-deluded, youthful memory of loving it and having a rather good time and people saying they liked it. But there are aspects of the play that I never even noticed when I was 20 years old, of course. And now being safely ensconced in middle age it just feels like so much more of it is noticeable, at least to me.

Where did your love of Shakespeare come from?
Cake: I came from a family that wasn't involved in the theater but was very involved in language and very involved in novels and plays. And I was exposed to Shakespeare from quite early on. And then the most wonderful thing happened to me. When I was 14, I auditioned for a company in London called the National Youth Theatre and inexplicably—because I'd done very little acting at that point—got in. And then spent every summer holiday from then on until I was 19 in London doing Shakespeare plays in these professional theaters with professional directors, being reviewed mercilessly by professional critics. And you know, playing these extraordinary parts. I played Falstaff when I was 17 terribly badly. "Wingeingly awful" as "Time Out" said.

You still remember the review!
Cake: It's hard to forget "wingeingly awful"; that one has stuck with me. It didn't quite kill me off so I suppose it did make me stronger…I had this fond idea that having this grounding in it, I would do them for the rest of my life and it's really not been the case. I did "Cymbeline" at Lincoln Center. I did "Coriolanus" at the Globe in London, and before that, I did very little in a production of "As You Like It" in Stratford right after I got out of university, and those are the only Shakespeares I've ever done in my life. It's a perpetual sadness to me and why I'm so overjoyed to have been able to do this.

Are there any great Shakespearean roles you'd like to play?
Cake: Oh my god, very few that I wouldn't. The Scottish play, I've always wanted to do. He's very generous to his men. You can have a go at these parts for a reasonable amount of time. I would love to do "The Winter's Tale"… I would love to do "Merchant of Venice." I'd love to do Iago in "Othello." "Antony and Cleopatra." The list goes on.

Do you have a preference for comedy or drama?
Cake: This is play is a terrific example. I mean, it's this fabulous, very famous comedy in the first half and then pitch dark crazy revenge tragedy in the second half. It makes no concessions to the idea of a genre of at all. And it's such an extraordinary gift to be able to do both of them. Though I must say, I find comedy very scary.

Why?
Cake: People are going to laugh or they're not going to laugh. In a dramatic scene, you don't have to worry about whether or not you hit the mark because you don't know how people are receiving it. There's not a noise that is a register of instant approval. If people aren't laughing, you pretty much know it's not going well. This is a famously funny play so the reputation of that is intimidating in one way. No one ever laughs at anything unless it's true, and I always think of laughter as recognition…it's agreeing that we understand this. And so trying to find the truth underneath that and not worrying about the end result—the laughing—is the best thing to do, but it's a scary thing to think about that the laughing may not actually appear.

Do you have any advice for aspiring actors?
Cake: I wish I'd worked harder when I was younger. That sounds silly, but I wish I'd got up in the morning and thought about how to make work for myself. I had this complacent idea that the world was going to come to me. You don’t need an industry to tell you that you're useful, that you've got a bunch of ideas, that you've got really fascinating things going on in your life, and I allowed that to shape my self-image too much. I wish I'd shaped it more for myself.

They didn't have webseries when you were growing up.
Cake: That's true, but we had a bunch of other things and people still do. There's so many outlets for creativity, but it's scary and it's a lot of work and you can't lie in bed. And I was fond of lying in bed.

Aren't we all?
Cake: Eventually, you've got to get up.