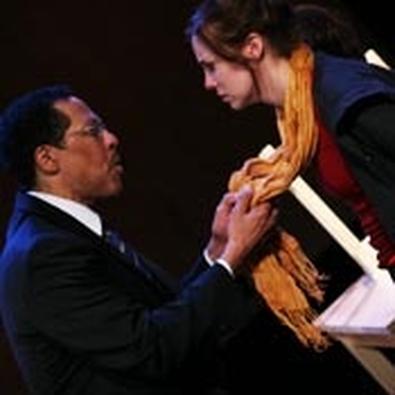 So young, so righteous, so annoying, the character of Antigone always teeters on the edge of brattiness. In this adaptation of the story -- using texts from Richard Nixon, Peter Brook, Susan Sontag, and others, though they are not marked in performance -- by 1990s wunderkind playwright Keith Reddin and Meg Gibson (who also directs), Antigone, played by Laura Heisler, actually smirks.

Too Much Memory wants to say something about politics and justice: There are forums after some performances with guest speakers such as Amy Goodman of Democracy Now! and Jared Bernstein from the Economic Policy Institute. But this retelling of the tragedy, described humorously by a one-man chorus (Martin Moran) as "an adaptation of an adaptation of a retranslation," presents too many stereotypes to drive the issues home.

It's not for lack of wit and imagination: Moran's speeches are funny, fresh, and wise and delivered with aplomb and poise. But it's hard to care about Antigone's struggle to give her traitor brother a decent burial when she is so gratingly unlikable. Heisler's grins look smug, though her face expresses anguish well. And she's surrounded by stock figures. Antigone (like Electra in that other myth) has a pretty, vain sister, Ismene (Aria Alpert), who may be a compromiser, but we're on her side when Antigone asks, "How can you spend sleepless nights when you have such beautiful hair?" Antigone's boyfriend, Haemon, played with puppy-dog devotion by Seth Numrich, is a stock love interest. There's also a silent political wife, complete with navy dress and French-twist hairdo (Wendy vanden Heuvel), and a leader, Creon (Peter Jay Fernandez), who prizes expediency over truth. Heavy-handed instances of water boarding don't help, although an Eliot-quoting soldier (Ray Anthony Thomas) is a nice touch.

One isolated instance of video and rock music toward the end gives the story a nice jolt of energy. More of that, with less overt preaching, would have driven this message home.

Presented by Rising Phoenix Repertory and Piece by Piece Productions