‘The Nance’ Is Bold, Brave, and Flawed 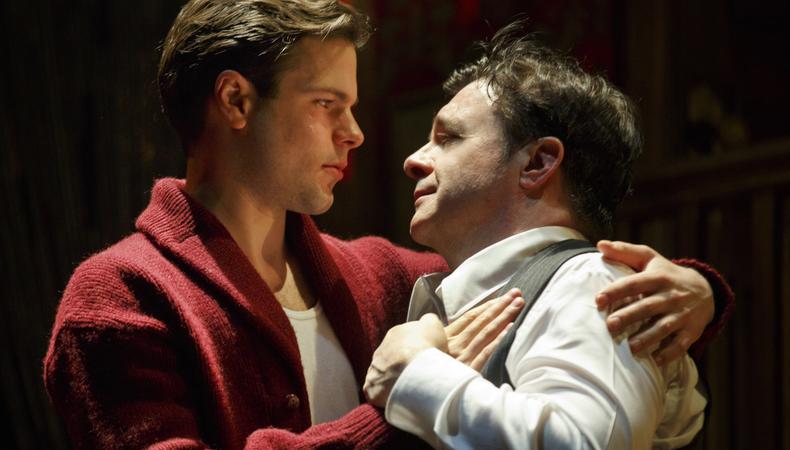 Douglas Carter Beane’s “The Nance” is a bold, brave play, in which this eminent theatrical boulevardier reaches for something deeper and darker. Chronicling Mayor Fiorello H. La Guardia’s crusade to wipe out burlesque, accomplished in part by the persecution of gay people, in 1937 New York City, the show offers taut direction from Jack O’Brien and a tour de force turn from the brilliant Nathan Lane. So it’s with great regret that I have to say that Beane’s yin-and-yang mix of low comedy and high tragedy, the personal and the political, never meshes.

Middle-aged and gay, Chauncey Miles is on the bill at Union Square’s Irving Place Theatre playing a nance, a stereotypically effeminate homosexual whose material is laden with ribald double entendres about sex. One evening, while cruising for trade at the Automat, he meets the handsome Ned, a strapping young man from Buffalo who’s new to the city. They end up back at Chauncey’s apartment for a night of naughtiness, but when Chauncey discovers that Ned is actually gay, not straight, he allows the lad, who is homeless and broke, to stay with him. Soon they are a couple, with Ned going to work as a performer alongside his lover. Afflicted with bottomless self-loathing and a confirmed right-winger, Chauncey excuses the Republican LaGuardia’s moralistic crusade against burlesque as mere grandstanding, but the pressures it puts on him and Ned coupled with Chauncey’s crippling emotional problems doom the relationship as surely as burlesque itself is doomed.

Beane’s structure—influenced by such works as John Osborne’s “The Entertainer” and the classic Broadway musical “Cabaret”—alternates dramatic scenes with burlesque routines and songs. The sketches are hilarious, but they don’t comment on the action sharply enough, and the pattern grows predictable. Beane has trouble integrating the lives of the other performers—three female strippers and a comic—with the story of Ned and Chauncey in meaningful ways, and his character writing lacks the complexity necessary to fulfill his dramatic ambitions. Perhaps that’s why his disappointingly vague final stage image is the result of an arbitrary event; in the parlance of the show biz, it’s “button hell.”

Lane is masterful as Chauncey, flaunting his trademark comic timing in the burlesque material and grounded and real in the dramatic scenes. The actor conveys volumes with the smallest of gestures—a cock of the head, a slight vocal inflection—and shows Chauncey’s self-hatred movingly. Jonny Orsini’s warm, open-faced work as Ned is a pleasure; he makes the young man’s love for Chauncey blossom effortlessly, even when the script isn’t providing much reason for it. Indeed, Lane and Orsini create such a persuasive bond between Chauncey and Ned that it almost justifies Chauncey’s utterly out of character final action as Ned leaves him.

Veteran Lewis J. Stadlen matches Lane’s virtuosity as that comic, the straight and Jewish Efram; the men play together with the grace of a Laurel and Hardy. As the three strippers, Cady Huffman, Jenni Barber, and Andréa Burns shine as they bump and grind and do comedy scenes while doing the best they can with their underwritten characters’ offstage personas.

I spent most of “The Nance” fascinated by the subject matter but frustrated by Beane’s execution. As flawed as it is, it’s an important try that’s worth seeing.