NEA Cuts Would Be Catastrophic for Theater Actors 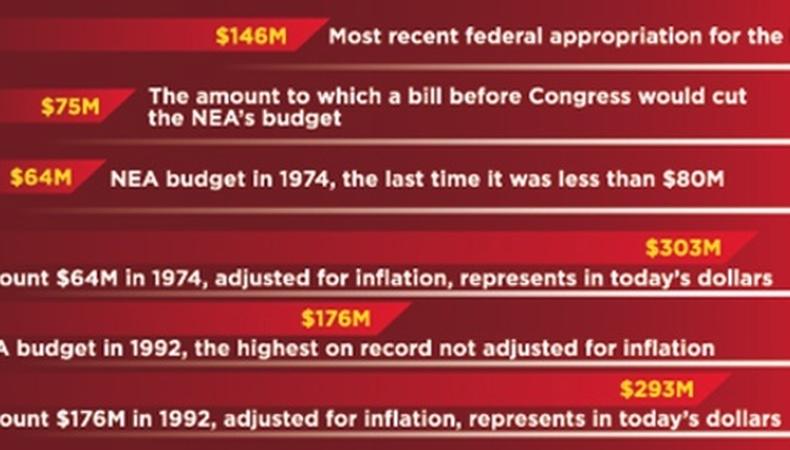 On July 31, the House appropriations committee convened to vote on the upcoming fiscal year’s budget for the National Endowment for the Arts and the National Endowment for the Humanities. The appropriations subcommittee put forth a bill to reduce the NEA’s funding to $75 million—a level not seen since 1974. But the ruling has been suspended until after Labor Day, leaving arts organizations across the country anxious to discover if their federal agency’s budget will be sliced nearly in half come Oct. 1.

For members of Actors’ Equity Association, the biggest threat is the loss of funding to playhouses in the League of Resident Theatres. “The impact of this kind of scale-back of the NEA on that large group of LORT employers is going to be so significant that many of our members are going to lose significant amounts of work across the country,” Actors’ Equity Executive Director Mary McColl said, adding that performing arts hubs such as Atlanta and Chicago will suffer the consequences, and the budget decrease will hit more than just actors. “Not only are those theaters hiring actors—they’re hiring stage technicians, they’re hiring ushers, bartenders. You look at the actual work that happens onstage as the pebble that hits the water, but the ripples that come off from that impact the community, impact jobs, impact the tax base.”

According to a 2012 study by Americans for the Arts, the nonprofit arts industry generates $135.2 billion annually in economic activity, supports 4.1 million full-time equivalent jobs, and returns $9.6 billion in federal income taxes. According to Laurie Baskin, director of research, policy, and collective action for Theatre Communications Group, “[the NEA] probably needs to shoulder their portion of the burden, but cutting the agency in half is not going to solve the problem but, in fact, make the problem worse.” Not to mention that the proposed cuts go far beyond the demands of the current sequester.

At the moment, every congressional district receives an NEA grant. This allows institutions such as Alliance Theatre in Atlanta to execute programming such as the National Graduate Playwriting Competition—now in its 10th year. “It’s the only program I know that gives graduate playwrights the chance to have a full-scale production in a regional theater with a professional company the way we would produce any play,” said general manager Max Leventhal.

NEA grants help foster new works at the Goodman Theatre in Chicago as well. “If the cuts went through, it would most likely mean that we would do one less new play a year,” said Roche Schulfer, executive director of the Goodman since 1980. “Since we do three new plays a year, that would be a 33 percent reduction in new play production each year.”

Will Congress approve these deep cuts? Baskin foresees Congress passing a continuing resolution—essentially a postponement—in which the numbers of fiscal year 2013 carry over into 2014 until Congress passes a revised budget. Still, the $75 million sits on the table as a viable option.

As Congressman Jim Moran, D-Va., a member of the appropriations subcommittee, told Backstage over email, the argument in favor of government support for the arts is not just about economics: “Winston Churchill, while under pressure to cut funding for the arts and museums during the bombing of London in World War II so as to be able to put it into England’s military defense, refused and responded by asking, ‘Then what are we fighting for if not for the survival of our civilization?’"