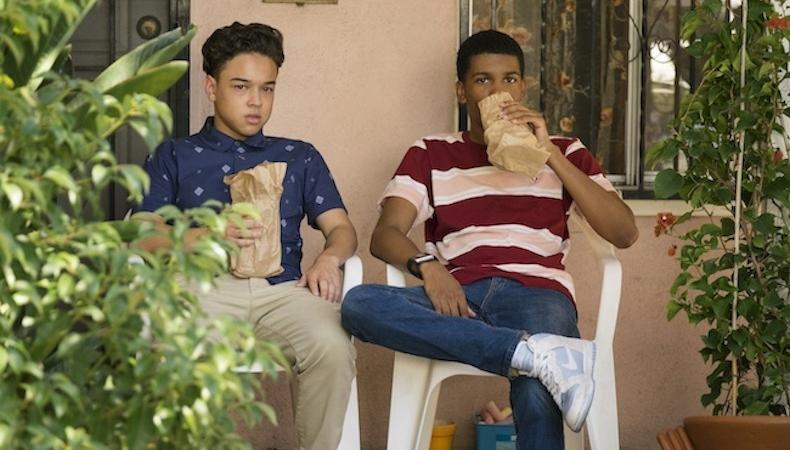 Jason Genao has had quite the year. With a supporting turn on “The Get Down” followed by a scene-stealing role as Rictor in “Logan,” the 21-year-old New Jersey native clocks in his first leading role with Netflix’s “On My Block.” He stars as Ruby Martinez, one of the four central teenagers who in their freshman year of high school in Los Angeles’ South Central neighborhood must deal with issues including gang violence and deportation. He came by Backstage HQ to discuss his training, offer advice to other young actors, and reveal that Ruby is to “On My Block” as Bea Arthur is to “The Golden Girls.”

The series’ hot-button issues are timely, but relatable.
“They’re not topics we see every day on TV, but they’re topics that are happening every day in real life, so it’s so relatable…. Where I grew up, it wasn’t too [different] from the plot of the story, so nothing felt unfamiliar to me. It all kind of was like looking back on my childhood. I wasn’t involved, but I was surrounded by that type of lifestyle.”

Start performing your audition sides right when you get them.
“Back in the day, I used to sit in my room [and prepare] all quiet because I lived in a small apartment with five other people. And then you get to the audition and you say it out loud, and these things don’t work out loud the way they work in your head. So now I’ve learned that you just have to perform it as soon as you get the sides [to] work on the performance. You can’t just be memorizing these words, you have to do it all right then and there when you get the sides so that when you go into the room, there’s nothing new. Everything that you do you can tweak, but if you’re doing it in your head and just trying to memorize the words, there’s no acting or performance behind it. Now you know a bunch of words, but you’re not the character. That’s not what they want.”

Genao brings himself to all his characters.
"When I don’t understand a line because it’s not the way I would say it, I take out words and add in words that I would say so that I can get the layout of the sentence, of the way that it should be said realistically. I can put their words back in and still have the flow of how the sentence should be.”

You don’t have to get fancywith self-tapes.
“[With self-tapes], I go with my cousins [to read for me] because they live pretty close and I can keep them locked in my house all day and then just buy them food for thanks. But, honestly, I just use my phone, make sure the house is really quiet, and have a good reader who will make the scene a little more real and not these monotone people who kill the scene for you. I don’t think the people who are watching care if you’re in a [fancy] room with a camera that’s this big and lighting and all that. A good performance is all it takes.”

Benjamin Lindsay
Benjamin Lindsay is managing editor at Backstage, where if you’re reading it in our magazine, he’s written or edited it first. He’s also producer and host of a number of our digital interview series, including our inaugural on-camera segment, Backstage Live.
END_OF_DOCUMENT_TOKEN_TO_BE_REPLACED