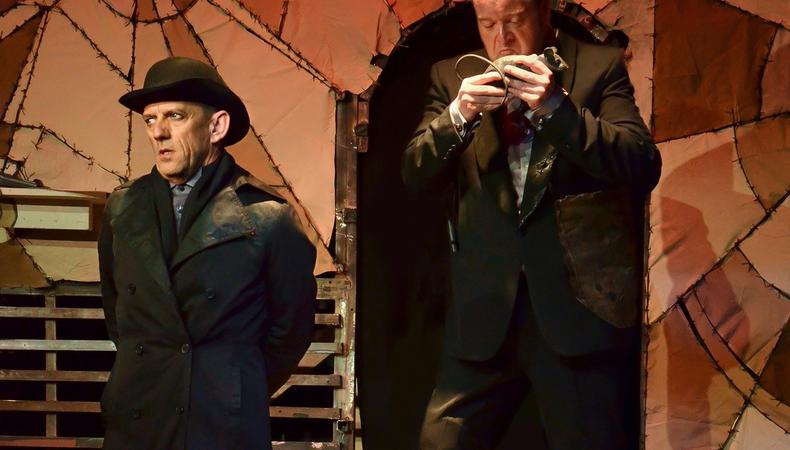 When blithely satisfied British office drone Richard Mayhew stops to help an injured girl named Door who is moaning on the pavement, his complacent world of job promotions and his engagement to the kind of woman he’s expected to marry are dashed to smithereens. Robert Kauzlaric’s epic adaptation of Neil Gaiman’s 1996 fantasy novel “Neverwhere” travels with Mayhew and his rescued waif into a dank netherworld “between the cracks of ordinary perception” below the streets of London.

In a place populated by cheerfully dangerous assassins, dubious heroes, talking rats, and fantastical creatures waiting to be challenged, Mayhew’s journey through the sewer ducts and frightening corners of Neverwhere becomes a quest to find a key that could unlock the mystery of why Door’s family was murdered and return him home to London without once having to click ruby slippers together. Unlike in Dorothy Gale’s classic adventure, however, the idea that “there’s no place like home” comes into question as Mayhew’s reluctance to participate turns into a gallant mission.

In the physically challenging role of Mayhew, understudy Bryan Bellomo, in for Michael Holmes, has a quiet, wide-eyed demeanor that helps the audience identify with Gaiman’s classic Everyman. Bellomo is so convincing with the injuries that befall poor Richard during the three-hour running time that it was a surprise to find him well and not limping at the curtain call. At times even the color appeared to drain from his face, leaving one to wonder if he really had turned his ankle during one of Andrew Amani’s many tightly choreographed fight sequences.

The supporting cast—featuring performers utilizing a variety of broad playing styles that somehow don’t collide with one another—is fiercely committed to telling the exhausting tale. Paula Rhodes is a sufficiently traumatized Door, Jonathan Kells Phillips is drippingly over-the-top as the underworld’s roguish royal Marquis de Carabas, and Devereau Chumrau is impressive as Hunter, the Amazon warrior along to protect our heroes. As a fiendish pair of cheerfully cartoony brutes, Mr. Croup and Mr. Vandemar, Ezra Buzzington and Bryan Krasner steal the show, contemplating devilishly evil murder plots with unmistakable glee. If they had suddenly launched into a chorus of “Brush Up Your Shakespeare,” no one in attendance would have been even mildly surprised.

Under the resourceful leadership of director Scott Leggett, utilizing every inventive trick the creative nutjobs who populate Scared Fools have to conjure, “Neverwhere” goes everywhere the imagination can take it. On the wide and unwieldy stage, Michael James Schneider’s game board of a set—featuring platforms, sewer ducts, and more secret passages than Aladdin had lamps—consists of roughhewn stitched-together pieces of fabric, resembling something conjured by Tim Burton. With Martin Morse’s “Pee-wee’s Playhouse” costumes created out of anything available and an incredible array of lighting effects by Matt Richter that defy the theater’s limited arsenal of instruments, there’s a fantastical bare-bones quality about “Neverwhere” that sweeps the viewer down into the sewers of London—if, of course, you’re ready to let your mind make the crossing.