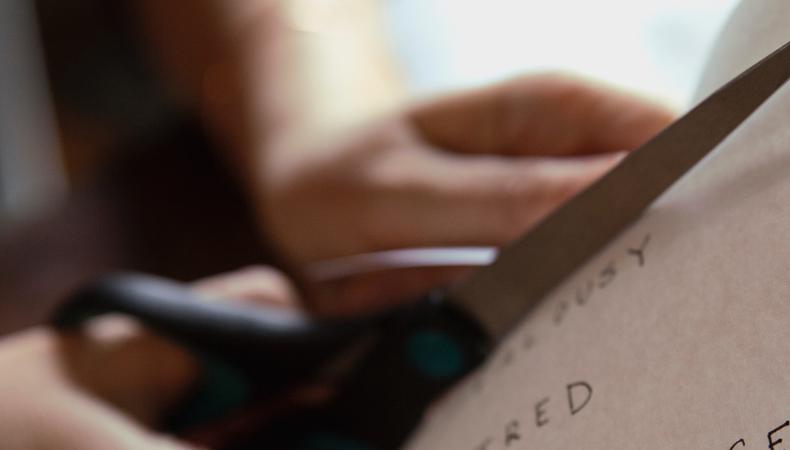 Memorizing lines can be one of the most difficult and demanding tasks an actor has to accomplish. Lines not only unlock the psyche of a character but also allow the actor to discover, explore, and experiment creatively in the rehearsal hall without the burden of a script in-hand.

Every actor has their memorization technique—I had one peer in theater school who memorized lines by laminating the pages and rehearsing in the shower. While it wasn’t the most environmentally-aware method, it worked for that actor.

I want to offer the memorization technique I’ve developed as a professional actor with the hopes that perhaps it could influence or aid your method.

Know what you’re saying.
As soon as you get the script, read it as much as you can. Make connections, write notes in the margins, do research—understand what your character is saying. Look up every unknown word, think about the syntax, consider the punctuation (or lack thereof), speak the words out loud and listen to their rhythm.

Get a sense of the choices the other actors are making.
Unless otherwise mandated by the director or stage management, don’t attempt to memorize until you have a table read. Table reads are the time when directors might announce cuts or reveal stylistic concepts that could influence your delivery. Use the read-through to get a vision of what world you and your fellow artists will be creating. Having a vision of the world of the play will help your lines stick.

Otherwise, you prematurely make line reading choices before you know what actions your character is responding to. If you lock yourself into the wrong line reading, you’ll spend a lot of time unlearning that choice.

Make a copy of your script.
Get some notecards. Cut out each line you have in the play and tape or paste those lines—in order—on one side of the notecards. Label the corners of the notecards with page numbers and scene numbers so you can keep your deck of cards organized. On the other side, create a mnemonic test for yourself with the first letter of each word of each line.

For example, currently, I’m playing a lead role in the New Orleans Shakespeare Festival at Tulane’s production of “All’s Well That Ends Well.” I have one particularly tricky line. On one side of a notecard I’ll cut and paste the line from my duplicate (copied) script:

Why, do you think he will make no deed at all of this that so seriously he does address himself unto?

Scene by scene, every day, I’ll test myself using the cards. I’ll start with the side that has the full text, then switch to the mnemonic test—if I can pass it a few times, I move onto the next line. Once I’ve tested myself a few times on the whole play, I’ll prioritize my studying on the scenes where I struggle the most.

Take your script out on some dates.
Now that you have your entire script in notecard form, carry it around. I like to divide my cards into separate decks based on acts. I put the decks in my back pocket and learn lines outside—this is what I call taking your lines on a date. When you’re memorizing the words of a character, you’re getting to know this person you’re charged with presenting on stage; treat it like getting to know someone whom you want to care about.

READ: Why Script Analysis Is So Important + How to Do It

I’ll go to a park, an outdoor coffee shop, or a patio restaurant and learn my lines. When you learn lines outside, or experiencing food or drink, those lines become associated with the sensory memories of what you’re doing so they stick out more in your mind. Instead of learning all of your lines in the same place, in the same room, at the same desk, associate your memorizations with sensory experiences.

Further moving around as you learn adds a kinesthetic quality to your memorization—when your physical body gets involved in your mental learning, it’s easier to remember.

Use your line-learning as a chance to promote your show and educate folks about the actor’s process.
Make sure you’re not being obnoxious as you memorize. If people ask what you’re doing, turn it into a chance to market your show and explain the actor’s process to curious folks. It’s valuable—and intriguing—for people to see how actors work and how much work goes into acting.

Keep your notecards on you at all times.
Now that your lines are in a user-friendly notecard form, keep them in your pocket or purse and pull them out when you’re in a waiting room, on a break, waiting for a subway, or have any moment to spare. Also, now that your lines are organized on small notecards, use them in rehearsal—it’s easier to act with the tiny card than a big packet of paper. Just make sure your cards are marked and organized by scene and page number!

Utilize muscle memory.
On particularly tough and verbose lines, try repetitively testing yourself on that individual sentence or line by saying it out loud. Make tally marks next to the line in your notecards. The more you say it, the more familiar your brain and the muscles in your body become with the line. Sometimes I’ll repeat a line twenty times in a row to help my mouth and mind get comfortable with speaking it.

Add your cues.
Once you start getting confident with your lines, add in your cues. Test yourself on those, too. Lines are no good if you don’t know when to say them and learning cues is a sign of respect to your other actors so you’re not accidentally stepping on their lines.

Practice planning and discipline.
Schedule your line-learning. Be sure to make time between rehearsals, day jobs, and side hustles. You must allow your brain the time to truly learn the lines of your character. Also, respect your artistic process enough to dedicate time to your craft and prepare. Finding time will be tough if you don’t plan and block it out far enough in advance.

Let your friends and family know that during your line-learning phase, your brain and time will be tightly occupied. Let them know you might be off-the-grid for a little bit. (Communicate this so they don’t worry or get confused.) Explain to the people you care about that it’s like you’re preparing for a big test—you’ll need time to study and prepare.

When you find creative ways to learn, you retain the information more effectively. And having the freedom of confidence in your lines not only lets you discover the character, but it lets you unleash your creativity.

Alex Ates is an actor (AEA), director, and certified theater educator. He is a contributing writer for Backstage and also freelances for Howlround and American Theatre. He is a member of the board of directors for the American Alliance for Theatre and Education (AATE) and is a company member of The NOLA Project. iAmAlexAtes.com.