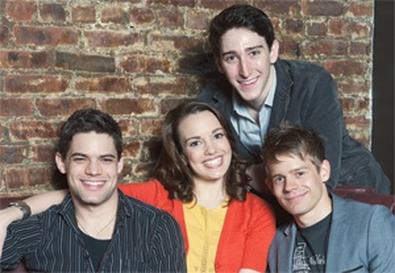 Jeremy Jordan, Kara Lindsay, Ben Fankhauser, and Andrew Keenan-Bolger have been preparing to star in Disney’s “Newsies” for a long time. The unabashed fans of the 1992 film are just as excited about the show’s limited Broadway engagement, which opens March 29 at the Nederlander Theatre, as the film’s die-hard fans.

“Newsies”—based on the 1899 New York City newsboy strike and re-envisioned for the stage by director Jeff Calhoun, choreographer Christopher Gattelli, Tony-winning book writer Harvey Fierstein, and the original songwriting team of Alan Menken and Jack Feldman—chronicles the exploits of orphan Jack Kelly and his gang as they revolt against publishing tycoon Joseph Pulitzer when he raises the distribution cost on the newsboys. A box office flop when it was released, the movie musical has since become a cult favorite, as the Broadway cast can attest.

“If my 12-year-old self knew that there was going to be a Broadway adaptation of ‘Newsies,’ I would have freaked out,” says Keenan-Bolger. Fankhauser—Davey in this production—played Crutchie in an unofficial adaptation at day camp, while Lindsay, who portrays the stage version’s new love interest Katherine Plumber, sang the movie’s “Seize the Day” in her middle school show choir.

“So many people of our generation that grew up with the movie have been part of the call to bringing it to Broadway,” says Jordan, who leads the 18 newsboys as Jack, played by Christian Bale in the movie. “It’s an honor to be the ones bringing it that next step that everybody’s always wanted.”

Backstage: How did you get cast in “Newsies”?

Jeremy Jordan: I’ve been involved with the project from the get-go, along with Andrew. I actually got brought in after they couldn’t find a Jack. They were like, “Uh oh, we can’t find a Jack,” and I was like, “Why wasn’t I brought in in the first place?” The casting director said there must have been some mistake, but anyways, I got it. And I’ve sort of been attached to it ever since.

Kara Lindsay: I got involved once it was at Paper Mill [Playhouse, where the musical premiered last fall]. I had worked there doing “Little House on the Prairie,” and I got to know the artistic director and assistant artistic director. They told me that “Newsies” was going to be premiered at their theater and were like, “I think you should go check out that Katherine role.” And I was like, “If it’s ‘Newsies,’ who’s the girl?” Then I realized it was the reporter. They changed it. I had to beg to go in for it; then one thing led to the next, and I got hired.

Ben Fankhauser: I got my involvement at Paper Mill, too. I was actually kind of late in the process. I guess they had some trouble finding a Davey, or someone they had was busy.

Jordan: No, they couldn’t find one.

Jordan: I read with you.

Fankhauser: I remember. I walked into the audition, and I recognized you, and I was like, “I didn’t know Jeremy Jordan is just a reader at Telsey on the side.” It all happened so fast for me.

Jordan: A lot of people had to do a whole lot of audition processes. Some of us got a little lucky. Andrew did not get lucky.

Andrew Keenan-Bolger: Well, I was lucky in certain senses. I got asked to do the reading. I came in, and we did two readings. Then I auditioned at Paper Mill. I had to come in and do a dance call, which is still one of my most horrifying moments. I’m not a dancer.

Keenan-Bolger: Thankfully no one in that audition group is in the show now, because they would be like, “I know you—you’re a hack.” I was supposed to go to the final dance call, and they were like, “He doesn’t have to go. We know that he can dance well enough to be a crippled person.”

Backstage: Do you feel any pressure to re-create the characters from the movie?

Jordan: You know the movie, of course, and then you take the text of the new script and you just start over. Because it is “Newsies,” it’s already going to be intrinsically so much like the film that it’s good to find new things to bring to it.

Lindsay: And also the writers can feed off what we do, which is awesome. Like what [Ben] said yesterday.

Backstage: What did you say, Ben?

Fankhauser: There was a line where [Davey] says, “We launched our strike in a most auspicious manner,” and I thought, “Maybe I should go up for a toast.” Now in the script it says, “As he’s toasting.” Just little things like that.

Jordan: Because it’s “Newsies,” we know that since we’re doing this version and eventually it’s going to be licensed, people are all going to do this version. You go to some random community theater, and they say some line that you know that you made up. That’s so crazy. It’s there for all eternity.

Backstage: What have you been learning working with Alan Menken, Jack Feldman, and Harvey Fierstein?

Lindsay: I don’t know how to speak to celebrities. Every time I talk to Alan Menken, I say something stupid and I have to apologize.

Jordan: He didn’t even do “Lion King!”

Keenan-Bolger: Exactly. That’s why she would feel stupid about it.

Lindsay: I’m like, “You write good things. Mehhh.” He’s an incredible human being.

Keenan-Bolger: But they are—they’re human.

Fankhauser: At Paper Mill, [Feldman] would just sit in on rehearsal with his notepad going over line after line after line. That was inspiring to me to see. It’s a lot of work, and a lot of thought goes into every single word.

Backstage: When did you learn that it was coming to Broadway?

Jordan: Somebody told me to look out online. But it was an interesting energy for me, because I was in another show and at that point wasn’t going to be able to do it. It’s funny how it turned around, because I was so happy for you guys, but I was upset for myself. And then my show “Bonnie and Clyde” closed, and I was so happy for myself and upset for all the people in my old cast. You can’t win everything.

Keenan-Bolger: I remember going and seeing “Bonnie and Clyde.” As a friend I want this to be a smash hit. And then selfishly, I was like, “I don’t want to do that prologue with any other Jack.”

Jordan: On the last performance at Paper Mill, I went up to a few people and I said, “Just promise me that whoever your new Jack is, you’re just not going to like him as much. Give him a little bit of a hard time.”

Backstage: Andrew and Jeremy, you both have been on Broadway. What advice do you have for Ben and Kara on their Broadway debut?

Keenan-Bolger: Fame is one intoxicating potion!

Lindsay: That’s a line from the show.

Lindsay: Except it is.

Jordan: It’s a different mailing address. You’re probably going to get paid a little bit more. But that’s about it. You’re doing the show. Your theater is probably going to be smaller. The exciting parts are the press and all the acclaim and the cast recording.

Backstage: Kara and Ben, how do you feel about making your Broadway debut?

Lindsay: I’m excited. There were two other shows that I was in that were supposed to come and then didn’t. You dream about this for a long time when you’re younger, and you feel like you’re almost attaining that dream, and then it’s taken away. And then finally it’s happening, and I’m like, “Wait, really?”

Jordan: Once you’re in the club, you’re in.

Lindsay: Oh, is there a Broadway club?

Keenan-Bolger: You don’t have your card?

Keenan-Bolger: Oh, you’ll get it.

Fankhauser: The stars really aligned for me. I just graduated from school in May, and the fact that this audition came up because of some things that I wasn’t right for, it’s just, I’m still pinching myself. It’s hitting me in waves.

Backstage: What is your favorite number in the show?

Fankhauser: I love “Carrying the Banner.” That’s one of my favorite songs ever.

Jordan: When the chorus kicks in, you’re automatically transported back to your 9-year-old self. I remember the first day that we sang it in rehearsal back in the first reading, and I was like, “Oh, my God, I’m singing ‘Carrying the Banner.’ ”

Keenan-Bolger: I remember them teaching it. And they were literally going to the piano like, “Ain’t-it-a-fine-life. All right, let’s try it.” And we were like, “Ain’t it a fine life!” in full harmony, four parts.

Keenan-Bolger: [Music supervisor Michael Kosarin] was like, “Will someone raise their hand if they don’t know this entire song?” Everyone just sat there.

Jordan: And of course “Sante Fe” is, I think, one of Alan Menken’s best songs.

Keenan-Bolger: You’d be hard-pressed to go through any of the “Newsies” audition books and not find that song in there. We all sang it.

Backstage: How do you think the show’s message will speak to audiences?

Jordan: It’s going to appeal to kids. They don’t have their own voice, because they have to do what they’re told. These kids found their own voice, and they stood up to the biggest man that they knew and beat him. It just makes you feel powerful.

Keenan-Bolger: Everybody keeps saying what a lucky coincidence that “Newsies” is happening when it is, with things like Occupy Wall Street. Obviously, Disney can’t control socially what’s going on in the world. But I don’t think it’s a coincidence that young generations right now are really latching on to this show. It reflects what our young generations are doing right now. They’ve stopped living as passively in the past few years and really taken on these corporate political giants.

Lindsay: You can take control, because other people believe the same thing you do. And there’s so many of you that you can band together and have a voice. That’s a pretty powerful message.