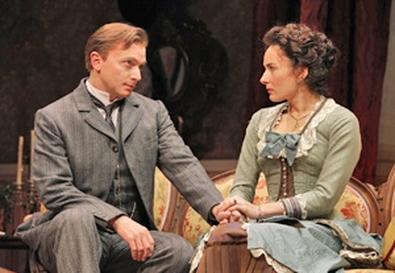 Director Les Waters' production mines the comic potential of this setup, with the audience howling at the sexual misconceptions espoused and the powerful effects of Dr. Givings' marvelous instrument. Waters also stresses the tragedies caused by the characters' being out of touch with their bodies. With the exception of Elizabeth, the wet nurse, everyone seems to be painfully yearning for something that he or she can't even name. It may be artistic or sexual freedom, but they've been imprisoned by Victorian convention for so long that they don't even know they're in jail. There are some repetitions and a few gaps in credibility, but Ruhl's grasp of her characters is strong, and their troubles are affectingly depicted.

As the vibrant Mrs. Givings, Laura Benanti is a ball of fire barely contained by costume designer David Zinn's elegant but restrictive corsets and gowns. Best known for her roles in musicals, including a Tony-winning turn in "Gypsy," Benanti is emerging as one of our best young actors. Her Mrs. Givings is wildly funny as she blurts out inappropriate observations and achingly moving as she tearfully seeks to fill voids in her soul and libido. Fellow Tony winner Michael Cerveris is equally complex as Dr. Givings, who believes he's a forward-thinking scientist but is as convention-bound as the most domineering husband. In a shattering final scene, beautifully staged by Waters with the aid of Annie Smart's moving (both literally and figuratively) set and Russell H. Champa's warm lighting, Cerveris bravely sheds both the doctor's insecurities and his clothes.

Maria Dizzia, Thomas Jay Ryan, Wendy Rich Stetson, and Quincy Tyler Bernstine effectively invest their roles with hidden desires and concealed passions. Conversely, Chandler Williams' Leo Irving, a British painter and one of Dr. Givings' rare male patients, comes across as a stage convention: the haughty, romantic artist identified by his eccentric clothes and rakish poses. I didn't believe any of his professed longings. It's the one wrong note in a painful and riotous symphony of sexual searching.