After six standout seasons and 113 episodes’ worth of hilarity, adoring fans of NBC’s feel-good workplace comedy “Superstore” bid farewell to the Cloud 9 family on March 25. Nico Santos, who plays the shady-but-lovable Mateo, sat down with us to discuss his feelings about the show’s conclusion, his character, his early days in the performing arts, and advice for fellow actors.

Santos feels that the ending of “Superstore” is a bittersweet moment.
“I never in a million years thought that we would make it to six seasons, 113 episodes. Not a lot of shows reach that milestone. For me, ‘Superstore’ was my big break and I was just so happy to be working at that level. The big dream is to get a job as an actor that was like a regular 9-to-5 that paid really well and was really fun. It was definitely a dream job and I definitely feel like I won the lottery. It was just a joy to work on. And I’m really sad I don't get to drive in the lot and then say hi to my friends every morning.” 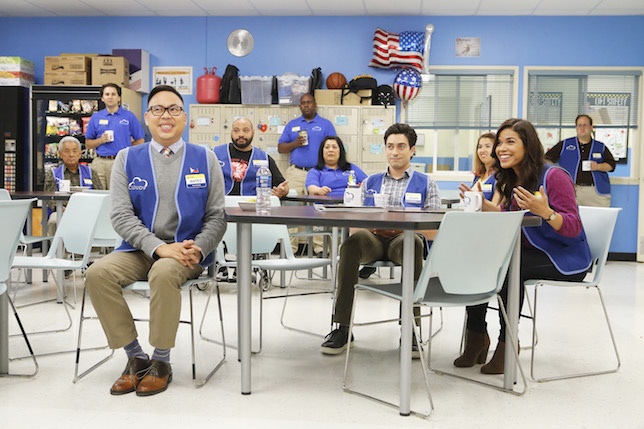 He feels particularly close to Mateo.
“I’ve tried out for every Asian part imaginable even though I wasn’t Japanese, I wasn't Chinese, I wasn’t Korean. They just see ‘Asian,’ [and] they’re like, ‘Here! Go play an Asian person even though you’re not the right type of Asian person to play that role!’ And to be able to play a character that was so close to my experience and so close to who I am, that just doesn’t happen very often. And I sort of really relished in the fact that I could draw from my own experience, but still be able to put out a very different [form] of what a queer, Fillipino person could and would be.”

Mateo was originally written as a straight, Latinx character.
“I got the sides for the audition and it was very much a guy who was super competitive, super ambitious, kinda was a shark and would just cut somebody off and cut you to get ahead. I worked in retail and I worked with those queens on the sales floor who would stab your mom to get a sale. I knew this person. Even though this person was not written as a queer Filliino, I was like, ‘I know this guy,’ and I just sort of created this character based on my experience with my other coworkers that I’ve had. And they liked it and eventually changed the character and adapted it to me.”

He suggests not overthinking when self-taping.
“Now that everything is in self-tapes, I would kill to just sort of wait in the waiting room with all the actors that you know who get called for the same part and to have that experience again. I guess the one thing I do like about self-tapes is that you can do whatever take you want and you can do it over and over again. My whole thing is that I am sort of crazy OCD and a perfectionist and even though the take could’ve been completely perfect, I tend to do it over and over and over again. I think it’s important to sort of be able to take a breath and look at it and be like, ‘No. This is as good as it’s gonna get. You can’t overwork it anymore, just send it in.’ Because at the end of the day, it’s not up to you.”

He wishes he would’ve discovered other paths to performing earlier in his career.
“I’m not saying don't get training. Training is important, and I got my training from doing stand-up for 15 years. That was my education. Training is extremely important and doing the work is important. But, there are other ways to be able to get there, to be able to get to becoming a working actor, than just going to acting school, going to theater school. And, you know, I’ll be 42 in April so I’m a little bit older than some of y'all, and back in the day, there was no channels, there was no YouTube, there wasn’t this sort of community of creators. But now, for anybody out there who’s wanting to get into entertainment, there’s so many paths and venues for you to go to explore your creativity.”