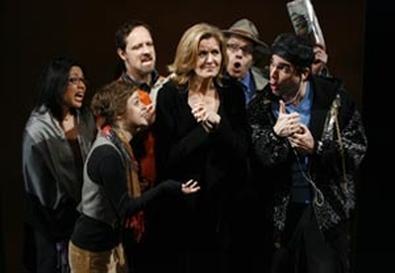 Where have we seen this scenario before? A brilliant, independent woman—perhaps a little too intellectual for her own good—is afflicted with a debilitating disease. As she battles the illness, she comes to appreciate the importance of balancing her emotions with her brains. At the final curtain, she puts her academic studies in perspective and develops a warm and loving heart. This season we've seen this familiar plot played out in 33 Variations, with Jane Fonda as a frosty musicologist fighting Lou Gehrig's disease. A few seasons back there was Kathleen Chalfant in Wit, and before that we had the dramatic and musical versions of Wings, featuring a retired aviatrix (played by Constance Cummings and Linda Stephens, respectively) coping with stroke-induced speech impairment.

Now playwright Susan Yankowitz offers us Night Sky, which centers on heavyweight astronomer Anna's struggle against aphasia, or speechlessness. It's important to note that Yankowitz was commissioned to write the script by director-playwright Joseph Chaikin, who suffered from the same ailment as the heroine. So Yankowitz cannot be accused of getting inspiration from these previous works. However, her script is heavy with clichés: the driven protagonist, the noble struggle to overcome the illness, the confused yet ultimately understanding circle of friends and family. Every plot twist is a dramatic setup rather than an organic outgrowth of character or action. Even the onset of the illness is unbelievable: Anna and her live-in lover have a totally unmotivated argument that sends this cool intellectual woman running out of her house in a rage right in the path of an oncoming car.

Yankowitz does provide an original detail or two. She makes Anna's boyfriend Daniel an opera singer. In an interesting touch, his music becomes a means of communication after the accident. But Anna's precocious teenage daughter, her fearful but supportive colleague, and her patient speech therapist are from central casting. In addition, Yankowitz adds a fellow aphasia patient whose therapy parallels Anna's but who adds nothing to our understanding of the disease or the development of the story.

Director Daniella Topol delivers a smooth staging, but most of the cast fail to break out of their familiar roles. As Anna, Jordan Baker does burst free of the Lifetime TV-movie mold with a frighteningly real performance. You can see the fog that surrounds her as she painfully searches for each word and the effort it costs her to express an idea. In the role of her fellow patient, Dan Domingues is equally detailed and empathetic.

Night Sky is also empathetic, but concern for an affliction is not enough for a solid evening of theatre.