A Night at the Tombs 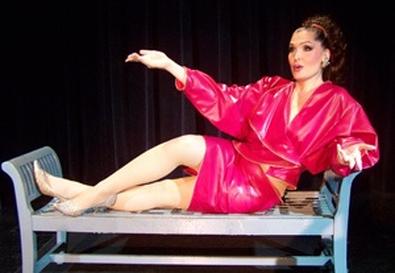 Photo Source: Michael Wakefield
In her solo show "A Night at the Tombs," the beguiling Bianca Leigh tells us what it was like to be young, gifted, and transgendered in 1980s Manhattan. If the story, surprisingly, is not quite as fresh as anticipated, it's clearly honest and consistently engaging. And because Leigh is equally talented as a writer and an actor, her 75-minute soufflé rises with appealing panache.

Leigh is beautiful and brainy, with winning stage presence and a delightful rapport with her audience. She inhabits a gallery of colorful characters convincingly and is as adept at emotional truth as she is at witty one-liners. On top of all that, she can sing. Under the watchful eye of director Tim Cusack, who also is credited with developing the show, Leigh never lingers too long in any one place as their entertainment flies confidently by.

I do have one caveat. Leigh, who sings six original songs in a variety of styles—pastiche 1940s pop to dizzy disco to Latin ballad—deserves sharper musical material. Only Taylor Mac's striking "Chase Me" shows both musical originality and the concision of a practiced lyricist (despite the occasional false rhyme) that gives a song force and weight. Leigh has penned or co-penned three of the remaining lyrics, but I'm afraid her talents don't seem to extend to this very specific craft that Alan Jay Lerner once put on a par with woodcarving.

In her closing speech, the just-freed Leigh vows defiantly, "I have as much right to breathe this air as anyone else. I will take up space, and I will do it beautifully." She's already accomplishing that every Thursday night at 8 on the Bowery, and she's a joy to behold.