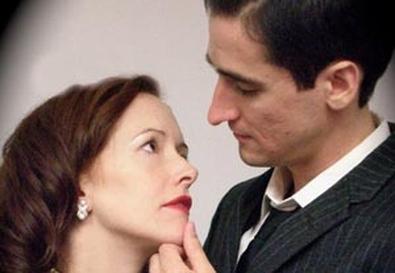 Photo Source: Marc Geller
At first it seems that playwright Stan Werse wants his "Noir" to be a parody of the moody detective movies of the late 1940s and early '50s. The play begins with a sad saxophone wailing and a tough-looking plainclothes cop named McQue standing in a spotlight delivering a monologue typical of the hardboiled genre. It's all about the laws of the urban jungle, with a couple of satiric jibes thrown in. Actor Michael McCoy delivers it with such a deadpan expression that it almost comes across as a part of a comedy sketch.

But as the piece continues the jokes vanish, and "Noir" became a respectful tribute. Werse constructs an intricate plot revolving around a boy-scout policeman corrupted by a beautiful widow. The cynicism-laden dialogue is spoken with the right snap by the four-person cast—in addition to McCoy, there's Andrew Dawson, Darrell Glasgow, and Abby Royle. Along with director Marc Geller, they take the material as seriously as a handgun pointed in their faces.