Should You Do Nude Scenes? 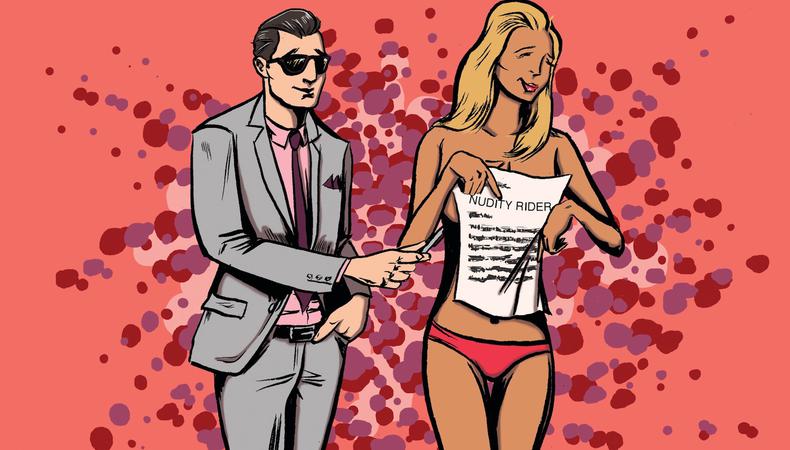 I like nudity. It’s one of my favorite things. I was born naked and I’m hoping to go out naked.

As an agent, I often come across roles that require actors to take off their clothes. Some of these roles are in genre films with no future and I usually encourage clients to avoid them. But there are plenty of parts in quality films and TV shows that require nudity, so the question is how do I protect actors when they’re offered those jobs?

The answer is with a nudity rider.

This is a document that is attached to an actor’s employment contract and it outlines the specifics of the scene and the conditions under which it will be shot. Space limitations prohibit me from posting an entire rider but here are a few major points from a nudity rider I used on a famous cable series:

Artist hereby acknowledges and agrees that Artist is required to appear nude and/or perform simulated sexual activity in the series. For the purposes of this rider, nudity is defined as the display of any part of the body which would be revealed if Artist were not wearing a bathing suit.

No still photography and/or stills from footage of nude scenes and/or sex scenes will be authorized by Producer to be made without the prior written consent of Artist. Other than the cameras being used to film the scene, no other cameras and no journalists or photographers shall be allowed on the set during scenes in which Artist is performing nude.

There shall be a Set Costumer on the set with a robe to cover Artist between takes.

Producer agrees to erase all digital memory of nude and simulated sex scenes used during the editing process once the series is completed. Producer further agrees that the digital master dailies of such scenes will be stored in a secure facility to which only the Producer and its designees (with explicit permission) shall have access. Producer will limit the distribution of dailies that contain nude or simulated sex scenes to those persons having a professional need to receive them.

Producer agrees that during all rehearsals for and during photography of any scene in which Artist appears nude or performs simulated sexual activity, the set will be closed to all persons (and observation by means of a monitor prohibited) except for those having a direct and proven professional need to be present.

In addition, the actual script pages that feature nudity are usually attached to the rider, so everyone is clear on the nature of the scenes, and changes cannot be made to those scenes without the written consent of both parties.

But the big question here is should you get naked in the first place? I will give you the same answer I give all my clients: It’s totally up to you. Performing nude in front of a camera is an extremely personal decision and the choice has to be yours and yours alone.

As an agent, I’ve never encouraged an actor to get naked—that’s not my place. And you should fire any agent who does.

Now here’s something else to consider. Back when I was a kid, I used to scan VHS tapes to find nude scenes of my favorite actors. But now we live in a world where, thanks to the Internet, a nude scene will always be easy to find and it will live on till the end of time. So you might want to keep that in mind, especially if you’re planning to have kids one day. I’m just saying…