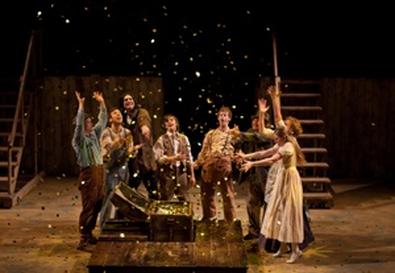 In the opening of Laura Eason's adaptation of Mark Twain's "The Adventures of Tom Sawyer," the characters sweetly explain that they will tell the story for the entertainment of boys and girls. This fact is obvious from the youth-theater venue and the high percentage of young people in the audience. However, the characters add, "We hope it will not be shunned by men and women." Amazingly, Eason manages just that.

Aided by Jeremy B. Cohen's sharp direction, Eason achieves the perfect balance between not patronizing young viewers and not alienating the adults. Basing the play on the Twain novel may help to generate mass appeal, but Cohen and Eason breathe new life into the classic tale onstage. Eason is no stranger to literary adaptations, as much of her work as an ensemble member at Chicago's Lookingglass Theatre Company focuses on bringing literature to the stage. Her past adaptations include "Ethan Frome" and "Around the World in 80 Days," and she has clearly developed a knack for translating sweeping plotlines to approachable, entertaining stage plays. In "Tom Sawyer" she makes her way through the entire book, capturing all the major plot points without rushing or cheapening the work. Some of the darker elements, such as the graveyard murder, could be frightening for children, but they lend an important gravity to the piece. The running time may be a tad long considering the target audience, but at the performance I attended the kids remained seated and spoke only to echo the sentiments onstage.

Daniel Ostling's simple set magically creates every place in St. Petersburg, Mo., from the graveyard to the haunted house to the cave. Central to his design is the notorious whitewashed fence, which works as a convertible structure for every locale. Robert Wierzel's beautiful lighting deserves a special mention, as everything from moonlight to candlelight and firelight glows onstage. Lorraine Venberg's period-appropriate costumes richly complete the attractive display.

The talented eight-person cast fleshes out all the characters with ease. As Tom Sawyer and Becky Thatcher, Tim McKiernan and Hayley Treider believably possess the wide-eyed innocence of young children. Robbie Tann is a bashful, subdued Huckleberry Finn, while Justin Fuller tackles many ensemble roles, standing out as Huck and Tom's comrade Joe Harper. Joseph Adams is sympathetic and affecting as the wrongly accused Muff Potter, and Michael D. Nichols disappears in the markedly different character roles of Injun Joe and the schoolmaster. Nate Trinrud and Nance Williamson round out the strong cast in the supporting roles of Sid Sawyer, Doc Robinson, Aunt Polly, and the widow Douglas.

Seeing this delightful show is like sneaking in on an elementary school field trip, in the best way possible. You'll feel just like a schoolchild again, without the lists of spelling words and multiplication homework.