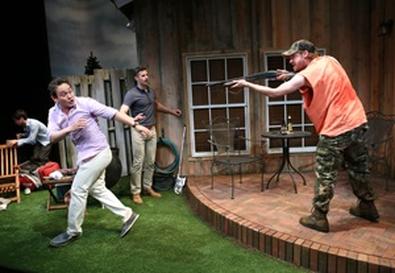 Photo Source: Joan Marcus
“Action is eloquence,” says a character in “The Bad Guys,” Alena Smith’s tiresome look at the state of manhood in 2012. Smith ignores his wisdom, opting instead for a stream of words that moves farther and farther away from the eloquence for which she strains.

Hal Brooks directs with a heavy hand (though it’s probably not possible to coax realistic deliveries of lines such as “Why do I feel like I’m sealing my own doom?”) as Smith’s good-bad guys congregate in the backyard of an upstate New York home the night that 31-year-old Noah (James McMenamin) is leaving for a new shot at life as a big-deal independent filmmaker in Los Angeles. His labor-of-love flick (which has been accepted at multiple festivals, so clearly he’s on the road to the big time!) is the story of a mysterious murder that happened when he was a teenager, one that he is convinced was committed by his childhood friend Ash. Noah and the star of his movie, Paul (Raviv Ullman, stranded for much of the play as a prompter of exposition), are surprised by the arrival of Noah’s stepbrother—and Ash’s best friend—Fink (Michael Braun, all fake bonhomie undercut by steely stubbornness). Swinging by with minimum motivation but maximum dramatic effect are redneck drug dealer Jesse (Tobias Segal) and a long-out-of-touch college friend of Noah’s, Whit (Roe Hartrampf).

Smith has stacked the deck in her favor by cramming as much potential for conflict as you could imagine into 80 minutes. Whit, a former Marine, has something important to say about Noah’s ex-girlfriend. Jesse’s father is bankrupt thanks to advice from financial maven Fink. The debate over the unseen Ash’s involvement in that murder rages on. Concepts of masculinity, from soldiers to the bonds of brotherhood, are taken up and then dropped, because Smith has written more than she can chew.

Under near-impossible circumstances, the cast does what it can with characters that are little more than paper dolls (Marine Man, Feckless Drug Dealer Man, New York Homosexual Man). McMenamin is a whiz at charting the course of Noah’s noxiousness, from puffed-up filmmaker to jealous ex. Segal navigates Jesse’s explosion of bottled-up rage well, considering that the audience has expected it since he first arrived on the scene carrying a rifle. Hartrampf is mostly wasted as the upright good-guy Marine, though he manages to execute a silent solo dance routine to “Bad Romance” without engendering too much vicarious embarrassment. By the time the final revelation has been heatedly hurled, you realize that these guys aren’t good or bad—they’re just man-child bores.