NY Review: 'You Better Sit Down: Tales From My Parents’ Divorce' 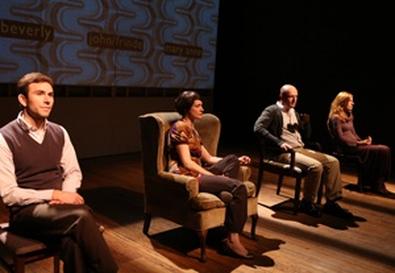 Photo Source: Joan Marcus
“The older I get, the more I realize it’s all about me, and you’re just in the picture. I have to tell the truth,” says a mother to her daughter. She is speaking about the breakup of her marriage and how her life has progressed since. You’d think such a harsh and brutally honest assessment would come across as cruel, but in “You Better Sit Down: Tales From My Parents’ Divorce,” the uncompromising and funny documentary theater piece from the Civilians, it’s delivered with a laugh and a sigh of resignation. The mother has reached a place where she can chuckle at her own narcissism and hopes her offspring can too. All the stories related here have the same bittersweet tinge of achingly real experience. To paraphrase Sondheim, these people have had good times and bum times, but they’re still here. They’re a little older, maybe not wiser, but they can look back on their volatile pasts without anger.

The concept is simplicity itself: Four actors have interviewed their own parents about their marital train wrecks. The script, a collaboration among the quartet, director Anne Kauffman, and dramaturge Janice Paran, uses the parents’ actual words. Three of the performers enact their mothers, and one plays both parents. In the course of an hour, early romances and late-night arguments are relived, the scar tissue caused by emotional wounds is revealed, and the journey from innocent newlywed to cynical survivor is chronicled with humor and pathos.

Jennifer R. Morris, who also conceived the show, is wickedly brash and intoxicatingly attractive as Beverly, the mother quoted above. Though she could be labeled as self-centered, Morris’ Beverly is loving and full of life. The actor joyfully tears into every story with unflinching yet vibrant intensity. Whether Beverly is explaining a quarrel over a Tiffany lamp, recounting one of the many “crying lunches” she had with her husband during the divorce proceedings, or enumerating her conditions for the separation, you simply cannot take your eyes off Morris.

Caitlin Miller is simultaneously prickly and tender in her depiction of the disillusionment of her mother, Mary Anne, with both the Catholic Church and her charismatic spouse. I love the way she shouts, “I don’t remember, Caitlin!” when coming to a detail Mary Anne would rather forget. Robbie Collier Sublett crosses genders without stooping to caricature in a nuanced portrait of his no-nonsense Texan mother, Janet. Matthew Maher skillfully switches between his dad, John, and his mom, Frinde, giving each distinct characteristics, such as a bark of a self-deprecating laugh for John and a shy sideways glance for Frinde.

With the aid of Ben Stanton’s warm lighting, Mimi Lien’s homey set, and Caite Hevner’s atmospheric projections, Kauffman and the cast re-create the feeling of a visit to see the folks, with all the fear, loathing, and love such a trip can entail. They also offer a lesson to aspiring actors: Your past can be valuable source material for creating theater.