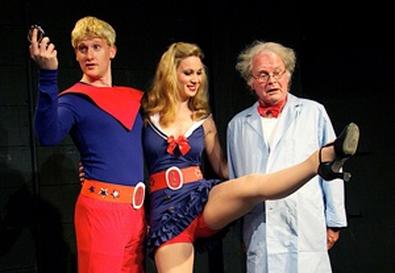 Photo Source: Yuri Lev Studio
There's no room for error when a musical features a song about sex called "Beaver Fever." Its creators must be at the top of their comedic game to prevent the number (and the show) from collapsing into sad, distasteful embarrassment. The authors of "Captain Crash vs. the Zzorgwomen: Chapters 5 & 6," currently running at the Richmond Shepard Theatre, aren't even close.

Actually, I should say "weren't," as "Captain Crash" is almost three decades old. I don't know if Dave Pierce's book was fresh, provocative, and dirtily funny when "Captain Crash" premiered in the 1980s, but now it's hoary, amateurish, and downright middle-aged compared with 2012's edgier comedy. The only emotion it aroused in me was pity; I felt sorry for the hard-working cast.

Parodying the Flash Gordon movie serials of the 1930s, "Captain Crash" purports to be two episodes of the adventures of Captain Crash, an officer of the American Space Service (known as ASS). He and his crew—made up of his girlfriend Dulla, a wizened scientist known as the Professor, and a dull but goodhearted giant called Swede—crash-land on the planet Zzorg, which is inhabited only by women. The Zzorgwomen want to use Crash and his crew to take over the universe (somehow), but with the aid of Zilch, the one remaining Zzorgian male, Crash defeats the Zzorgwomen. Then he and his mates zoom off to their next adventure.

The score—lyrics by Pierce and music by Steve Hammond, Rick Jones, and Weston Gavin, with additions by Harrison Wade and Sarah McShane—is saturated with nondescript melodies and cliché-ridden verses. Aside from "Beaver Fever," the only memorable song is "Trapped," which the characters sing many times during the show. I sympathized on each occasion.

Richmond Shepard's perfunctory direction and Roberta Raymond's undistinguished choreography provide the cast no aid in overcoming the thudding dialogue, wooden characterizations, and silly plotting landed on them by the writers. Only Kyle Payne, who plays Zilch with the manic gusto of a young Robin Williams, manages to distinguish himself. But proving yet again that even the most hapless production features some artistry, Justine Rivera delights with witty costumes that remind us of the tacky, ill-fitting outfits worn in those Flash Gordon serials.

"Captain Crash" is based on "Flash Fearless vs. the Zorg Women: Parts 5 & 6," a concept album released in 1975. It numbered performances by such artists as Alice Cooper and John Entwistle, the Who's bass player. Six years later the album's writers changed the title (to disassociate it from Flash Gordon) and wrote a musical around the songs. This is its New York premiere. Most likely it will also be its final chapter.