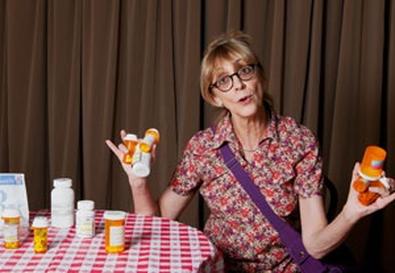 "Flambé Dreams" is a silly soufflé of a musical comedy that most of the time stays airily afloat. It's hardly going to set new parameters for musical theater. In fact, it may get you thinking about various musicals from the past that it references. Nevertheless, it makes for a seductively entertaining two hours or so, even in a theater sultry with lame air conditioning on a hot night.

The book concerns Joe Christiansen, a young man inspired by the legend of his late father, Preston, Idaho's greatest (and only) maitre d', known for flaming desserts, one of which caused his untimely demise. When the Preston restaurant where Joe's been working closes, he leaves for New York to make it big as a maitre d', well supplied with prescriptions for anti-depressants from his overly caring psychiatrist mother. He, of course, meets an assortment of colorful and helpful denizens, including a fetching pharmacist named Gloria. Gloria not only fills his prescriptions but ignites his libido. Joe also fitfully pursues his career, with Mom on the phone watching over him. He finally achieves his dream but not quite as expected.

The script has the breezy insouciance of those turned out by Betty Comden and Adolph Green for their New York–based classics ("On the Town," "Wonderful Town," "Bells Are Ringing," and others). "Flambé" doesn't quite match the smart-alec edge—or the heart—that the legendary pair gave their work, but it's studded with genuinely funny jokes in Matthew Hardy's dialogue and lyrics. Hardy's targets range from "The Sound of Music" to New York's proliferation of Duane Reade drug stores. Randy Klein's vigorous, traditional-sounding music is most notable for the way it helps set up the gags in Hardy's words. Things only sag toward the end, when the story threatens to take itself too seriously. But it winds up grandly with an ironically loving anthem to Manhattan's much-abused neighbor New Jersey.

The show is blessed with an ebullient production featuring a terrific five-person cast, skillfully used by director West Hyler. Jarrod Spector gives Joe a sweetly appealing sincerity, while Broadway veteran Catherine Cox brings comic assuredness to Joe's mom. Jillian Louis is a delightfully bubbly Gloria, and Kevin B. McGlynn and J. Elaine Marcos score big in multiple roles. It's great fun to watch how all five pull together in production numbers, looking like a stage filled with legions.