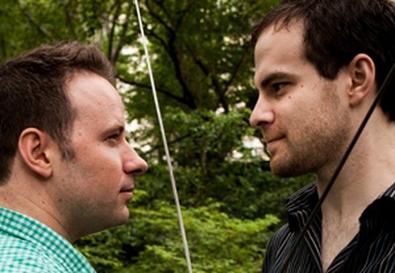 Photo Source: Isaiah Tanenbaum
The Delacorte Theater excepted, doing Shakespeare in Central Park is no picnic, thanks to the uncontrollable weather, lack of facilities, and plentitude of ambient noise, bugs, and passersby who threaten to invade the playing space. Nevertheless, game groups of thespians keep doing it summer after summer, and Boomerang Theatre Company, which has been bringing the Bard to Central and other parks throughout the city for 14 years, obviously has the knack of it.

Despite sometimes overwhelming competition from a nearby amplified guitar and vocal concert at the performance reviewed, Boomerang's new production of "Hamlet" is a solid affair. The dark, complex tragedy—even in a heavily cut text—managed to pretty well hold the attention of the folks on blankets and lawn chairs scattered across a spacious swath of grass near 77th Street and Central Park West for an intermissionless stretch of some two hours and 10 minutes.

The afternoon's mild temperatures undoubtedly helped, but a lot of credit must go to the commanding work of Zack Calhoon in the title role. Along with intelligent and fluid handling of the language, he brings a contemporary freshness to the character. This prince of Denmark is more antic and playful than melancholy, often using full body language to express his frustration and uncertainty. Sporting a flask, the actor plays him a bit soused at the start, but Calhoon's Hamlet quickly sobers up and makes clear at strategic moments the depth of his pain at the loss of his father, King Hamlet; the betrayal of his mother, Gertrude; and the infamy of his Uncle Claudius.

The 14-person cast further boasts commendable turns from, among others, John Greenleaf, as a particularly conscious-stricken Claudius; Annalisa Loeffler, a regal but vulnerable Gertrude; Kayla Wickes, an affectingly distraught Ophelia; Uriel Menson, an officious but likable Polonius; and Mark Souza, a sturdy Laertes. Especially notable is Ralph Petrarca's rendering of the ghost of King Hamlet, a truly spooky apparition, even in broad daylight.

Director Tim Errickson's staging is incisive and fairly traditional and uses well the patch of park claimed as a stage. I can only quibble with his decision to begin the show with the climactic duel between Hamlet and Laertes, breaking it up to deliver the rest of the play in flashback segments. It blurs the propulsive force of the plot. But he scores with several imaginative touches, such as the big banners waved by ensemble members to evoke the cold and wind on the battlements of Elsinore when King Hamlet's ghost appears. The same banners are later used to form the arras behind which Polonius hides to spy on Hamlet's confrontation with his mother.

Kara Branch's costumes are a mixed bag of contemporary looks, but they serve well their main purpose, distinguishing the players from the audience and the multitudes strolling through the park on a summer weekend.