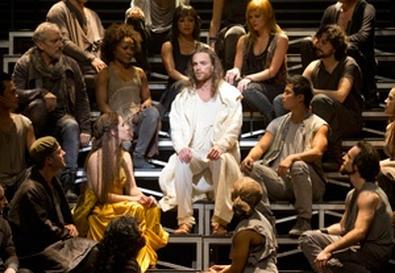 Photo Source: Joan Marcus
When “Jesus Christ Superstar” opened on Broadway in 1971, Andrew Lloyd Webber and Tim Rice’s sung-through chronicle of the last seven days of Christ set off a firestorm of controversy. Not only was the sacred story being told in driving rock music; it depicted the Messiah as a mortal man questioning his mission of spreading love to a violent world. Tom O’Horgan’s spectacular production transformed the passion into a surrealistic circus, which attracted young audiences but repulsed theatrical and religious traditionalists. While protesters picketed outside the Mark Hellinger Theatre, audiences flocked to the show, and the infectious score produced many pop hits. Main Stem revivals in 1977 and 2000 did not achieve the impact of the original, and the work has gradually morphed in public perception from dangerous and edgy to familiar and sentimental. Now director Des McAnuff seeks to restore the scary and challenging aspects of “Superstar” in a shiny, high-decibel production transferred to the Neil Simon Theatre after runs at Canada’s Stratford Shakespeare Festival and San Diego's La Jolla Playhouse. While music director Rick Fox and sound designer Steve Canyon Kennedy deliver a crystal-clear rendition of Lloyd Webber’s vibrant score and Rice’s tricky lyrics, and the performances are largely solid, this “Superstar” lacks soul.

The problems include Robert Brill’s industrial set, which resembles an empty airplane hangar, Paul Tazewell’s nonspecific costumes that fail to place the proceedings in a recognizable era or locale, and McAnuff’s showy staging, which feels gimmicky and slick, missing the emotional impact of Christ’s sacrifice and his love for his disciples. The crucifixion scenes are the most telling. Just before Jesus takes his final walk to Calvary, McAnuff has him and Judas mount a moving platform that extends over the first several rows of the orchestra. Then he stands before a massive cross that lights up like a dozen Broadway marquees. All very flashy, but these stagy choices don’t give us insight into Jesus’ conflicts or his message. Furthermore, the blocking and Lisa Shriver’s choreography are so busy that often I didn’t know where to look.

McAnuff deserves credit for an admirable job of pacing—the show flies by at a little less than two hours—and a talented cast displays an array of powerful rock voices. Paul Nolan’s Jesus reaches the heights of anguish and yearning without going overboard. Chilina Kennedy has a lovely, liquid tone that subtly imparts Mary Magdalene’s need for totally accepting Christ’s love and her reluctance to give up her old wanton ways, especially on the gentle “I Don’t Know How to Love Him.” Special kudos to understudy Jeremy Kushnier, who stepped into the pivotal role of Judas for an ailing Josh Young. Kushnier meets the requirements of the demanding score while turning Judas into more than a hissable villain. He makes the decision to betray Jesus understandable if not sympathetic. The reliable Tom Hewitt is a formidable Pilate. As the high priest Caiaphas, Marcus Nance has a bass that flows like melted butter, while Lee Siegel, as Simon, and Mike Nadajewski, as Peter, have strong moments.

Bruce Dow wins the scene-stealing award of the season with his delightfully decadent Herod. Looking like a combination of Susan Hayward as Helen Lawson in “Valley of the Dolls” and Charles Laughton as Nero in “The Sign of the Cross,” Dow creates a simpering sensualist who mercilessly mocks Jesus and longs to get back to his skimpily clad chorus boys and girls. It’s a funny and frothy three minutes. But when a brief cameo is the highlight of the show, you know you’re in trouble.