NY Review: 'How I Learned to Drive' 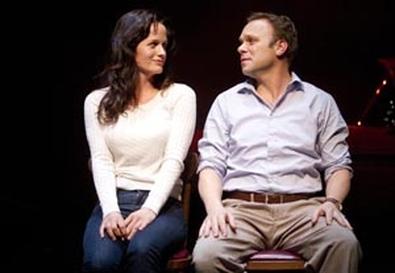 Photo Source: Joan Marcus
Ah, the ineffable alchemy of theater. Who can say why some brews bubble while others go distressingly flat? (As Alan Jay Lerner once said when asked to account for the startling success of "My Fair Lady," "Maybe it was the chandeliers.") Second Stage seems to have the ingredients in place: a top director, a talented cast, and a Pulitzer Prize–winning script. Nevertheless, this new production of Paula Vogel's 1997 drama "How I Learned to Drive" never slips satisfyingly into gear.

In a series of driving lessons that take place out of chronological order and largely cover her teenage years, Li'l Bit is initiated into more than just the secrets of the automobile by her goodhearted uncle by marriage, Peck. This Southern country boy, who moved north to his wife's home turf of Maryland after serving in the Marines in World War II, is the only member of Li'l Bit's "cracker" (her word) family to treat the girl with kindness, support, and respect. He's also a pedophile, who begins feeling up the well-endowed girl in his car when she is 12. (Peck describes her as having the body of a 20-year-old.) Peck doesn't go any further, telling her that nothing more sexual will happen unless she wants it to. Their relationship is teasing and affectionate yet flavored with tension. Peck sticks to his word and even gives up drinking for his niece. She enjoys the attention and approval, if not the petting, but the situation gets more strained as Li'l Bit grows up. When she turns 18, reaching official adulthood, a reckoning occurs.

Vogel's play lives and breathes in the interstices of this dangerous relationship, with pauses, gestures, and glances counting for as much as if not more than the text. Unfortunately, the Juilliard-trained Elizabeth Reaser, known principally for her film and TV work, especially the "Twilight" movies, hits the role too squarely on the head, missing the complicated feelings shifting under Li'l Bit's surface. Norbert Leo Butz, as Peck, understands the power of emotional suppression and uses it well. He's particularly effective in a monologue wherein Peck is teaching little Cousin Bobby how to fish with the clear intention of later molesting the boy. Butz, however, is handicapped by his inherent quality as an actor that repeatedly gets him cast as tricksters. Peck's public persona needs to be rigorously respectable, and try as he might, Butz can't quite get there.

The most successful acting is done by Kevin Cahoon, Jennifer Regan, and Marnie Schulenburg as a Greek chorus inhabiting all the other roles and making Brechtian announcements between scenes. Cahoon and Schulenburg are both funny and infuriating as Li'l Bit's uneducated grandparents, given to raw talk about sex and bodily functions and utterly dismissive of any future for their granddaughter other than marriage. Regan moves with confidence between Li'l Bit's subdued, shopworn mother and her sister, the anxious Aunt Mary, who loves her husband despite his affliction.

Director Kate Whoriskey keeps the 90-minute drama moving briskly, perhaps a bit too briskly for the subtext to resonate. Derek McLane's set also leans to the obvious, dominated by a large (and largely unused) red car upstage left and rows of receding streetlights. (When Reaser delivers Li'l Bit's final monologue while standing under one of them, the unfortunate visual image recalls a streetwalker, which I can't believe was the intention.)

Vogel's play is notable for its insistence on rendering Peck and Li'l Bit as fully dimensional people with flaws and strengths, rather than demonizing him as predator and reducing her to victimhood. It's a tough and beautiful work, and if you've never encountered it, I would urge you to take advantage of the opportunity. But anyone who saw Mary-Louise Parker and David Morse in director Mark Brokaw's stunning original production is likely to sense that something's missing.