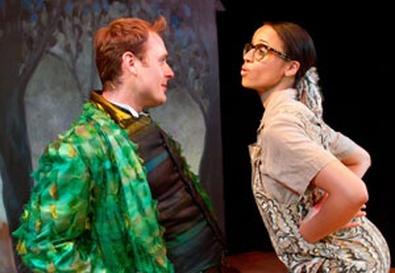 Photo Source: Robert Schraeder
"Cinderella" meets "The Ugly Ducking" in "Lucky Duck," a fluffy children's musical with a score by Bill Russell and Henry Krieger, the songwriters of "Side Show," about the importance of accepting everyone. It's what's on the inside that matters, and a good heart trumps a pretty face. However, this valuable lesson gets muddied when the show introduces concepts unfamiliar to its young audience members. While director Jeff Church keeps the energy up and the youngsters entertained, Russell and Jeffrey Hatcher's book reuses standard fairy-tale devices and teaches kids ideas they don't need to be learning yet.

Ugly duck Serena is hated by her stepsisters and stepmother. When the king declares that there will be a songbird contest, and the prince adds that beauty will be the deciding factor, Serena wants to enter. However, everyone disapproves of her because she does not look like anyone else, and they won't let her showcase her singing voice. With the help of her new friend Wolf, detested by all because of his species, Serena gets a makeover, joins the competition, and teaches everyone to accept each other.

However, Serena isn't loved until she is beautiful, telling children that appearances are important. Also, the characters continually discriminate against the "carnivores," who are segregated from the birds. While this plot point illustrates a problem with racism, most 4- to 8-year-olds, the play's demographic, probably do not understand racism. "What's species-ism?" a young child asked audibly during the performance I attended. My point exactly. The play can be a teaching moment, yes, but why would we introduce these issues to young children who don't even know that they exist?

There are also some harsh themes for kids. When the wolves start eating the chickens and ducks, another wise child shouted, "We don't eat people!" At least the kids already know better. The show tries to appeal to all ages; however, instead of channeling cutting-edge comedy as in films such as "Shrek," the musical boasts unoriginal innuendo that's unnecessary for children and unfunny for parents.

Under Anthony T. Edwards' steady musical direction, the peppy songs succeed at keeping the kids happy and engaged, though the score holds little diversity. The expressive cast exudes a charming youthful energy, and the dynamic performances display adept musical theater chops. All that the kids care about is the dancing and singing animals, but it's too bad that the actors playing them haven't been provided with more-appropriate lessons to teach.