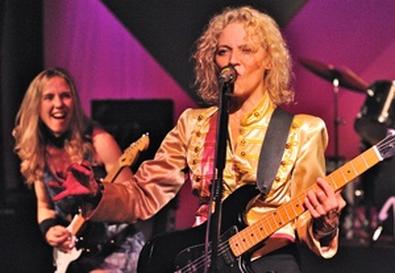 Photo Source: Chris Monroe
It’s a simple idea: Give a voice to the voiceless; probe into the psyches of average, everyday people; and let them holler and express their innermost longings. Or as the opening number in Richard Caliban’s “MoM: A Rock Concert Musical” puts it, “Let rock ’n’ roll/Save your sorry-ass soul.” Five suburban mothers—taken for granted, at odds with spouses and kids, and well past the prime demographic of rock performers and audiences—form a musical group called MoM. As they let rock ’n’ roll save their sorry-ass souls, the good will engendered by the breaking-free premise and some enjoyable rock ’n’ roll is exhilarating. But their predictable fate and some lax storytelling fail to keep the ride in high gear.

It’s a versatile bunch, with the women singing in a wide variety of genres and playing everything from guitar to sax to flute to accordion, though there’s also what sounds like prerecorded accompaniment. Nancy (Jane Keitel) has father issues, Ingrid (Dana McCoy) is married to and neglected by a famous classical cellist, Catalina (Stefanie Seskin) has a failing marriage and a thing about cowboys, Melissa (Bekka Lindström) wants to run wild and is questioning her sexuality, and Karen (Donna Jean Fogel) is going through a general midlife crisis. There’s plenty to sing about, and Caliban’s score, delving into classic rock, reggae, calypso, and rap, has its moments, notably Catalina’s “Cowboy in the Sky” and the a cappella “Life Is Sweet.” Much of the show is about female empowerment and the unfair male dominance in the rock world; it could be an homage to Dory Previn in the ’70s.

But “MoM” doesn’t go anywhere you don’t expect it to go. The women are successful, become estranged from suburbia and their families, and deal or don’t deal with groupies, drugs, affairs, and roadies. They reach a happy ending at their old high school gym because the audience expects one, but how they get there is hazy and underdramatized. The action consists almost entirely of a performer standing center stage, grabbing a microphone, and telling us what happened and how it made her feel. Even in a concert framework, that’s lazy storytelling, and the one convincingly dramatized scene, in which Melissa meets her teenage son (played by Karen) on the road, makes one hungry for more.

Only the raspy, growly Lindström has a real rock voice, and McCoy, whose character goes through some Janis Joplin self-abuse but comes out fine, isn’t much of a singer. They’re all able musicians, however, and at times the energy level does plausibly approach that of a big-name group at Madison Square Garden. Ultimately, the show is far more rock concert than musical, and speaking as a fan of musicals, I felt underserved.