NY Review: 'You, My Mother' 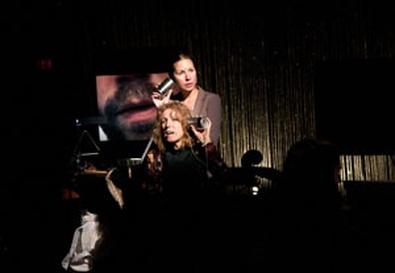 Photo Source: Prudence Katze
Divided into two sweet and precisely performed parts, the Two-Headed Calf's "You, My Mother" is a stream-of-consciousness opera crafted by two playwright and composer teams. Director Brooke O'Harra's airy production employs elegant slide projections by Ahram Jeong and Yoonkyung Lim and dissonant live music performed by the group Yarn/Wire to coax a mother's life story out of the wispy remembrances of her adult children.

Beth Griffith plays the titular mother with nice composure in both parts, the first of which was written by Kristen Kosmas, with music by Rick Burkhardt. There is no set to speak of; the four-person cast simply meanders around the Yarn/Wire orchestra pit, which consists of a piano, an electric keyboard, and two massive percussion setups. Perhaps Kosmas' most intriguing maneuver is to give the mother a broken speech pattern throughout the first half, so we—and the rest of the cast, who ably drift in and out playing Griffith's children—only hear every other word she says.

Laryssa Husiak later tells us (as huffy daughter Helen) that Mom never quite figured out how to work their in-house intercom system and always pressed "talk" when she should have pressed "listen." This turns out to be an apt metaphor for the dichotomy of Griffith's character, described as both selfish and charitable by her children. It's also an excellent motif for Burkhardt's staccato score. An ingenious scene near the end of the first part has Griffith clicking through slides of family photos on three projection screens, except there are no photos, only brief text descriptions of what they should be, such as "someone's wedding" or "a holiday."

While the second act lacks the imaginative punch of the first, Karrinne Keithley Syers' script offers some choice monologues, including Mike Mikos' heartfelt account of several road trips the family took. Brendan Connelly's music is also much more linear, leaning upon pleasant harmonies and a chilling solo by Kate Soper during what is called the "Ghost Sequence."