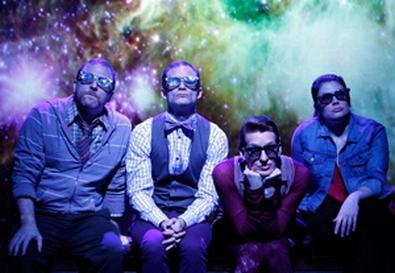 If you want a self-help seminar, “Now. Here. This.” is ready to help you realize your potential. The cast and creators of “[title of show],” that bubbly little gem of metatheater that journeyed from Off-Off- to Off- to Broadway, have reunited for this exploration of self-realization, friendship, family, evolution, tribal identity, and the creation of the universe. If that sounds like a rather full menu for a 90-minute musical revue, it is. There are smart and sparkling moments to savor, but the creative personnel have taken on so much material and given it such a feel-good, crunchy-granola spin that the show comes across as more of an empowerment lecture than an entertainment.

We open in the dark, then Richard DiBella’s clever projections illustrate the birth of the earth’s first amoeba as the four-member cast—Jeff Bowen, who’s responsible for the music and lyrics; Hunter Bell and Susan Blackwell, who collaborated on the book; and Heidi Blickenstaff—sings about the unlikelihood of our planet ever supporting life in “What Are the Odds?” The actors then explain the show’s title and premise: We’re all so busy and distracted by the trivia of daily existence that we’re not truly present in our own lives. If we focus on the current moment (now), location (here), and action (this), we will be able to “get more life.” This philosophy is derived from the writings of Thomas Merton, a Trappist monk and social activist, and sounds more like a brochure for a weekend retreat than the basis of a musical.

The scene shifts to a science and natural history museum, where our quartet, playing theatrical versions of themselves (as they did in “[title of show]”), are listening to a British voiceover (provided by Roger Rees) explaining the origins of the cosmos. After some wisecracks and pop-culture references, they explore the flora and fauna. Each exhibit leads the “characters” to examine a challenging aspect of their past and how they overcame it. Bowen compares his antics as the class clown covering up his gay sexuality to a chameleon’s camouflage. Blickenstaff sees the gaudy plumage of rare birds and recalls her desperate need for attention. Bell likens his habit of indulging in fantasy to a turtle retreating into its shell. Blackwell identifies with worker bees; she was always busy in high school to distract from her shame over her messy, low-income household. These individual pieces are fun and sometimes even moving—a sequence about the death of grandmothers was touching without being treacly—but they fail to coalesce into a satisfying whole.

Despite this central flaw, there is much to enjoy. The performers endow their stage personae with a delightful combination of childlike giddiness and adult self-deprecation. Bowen’s score has zip and punch, and Bell and Blackwell’s book has plenty of wit and feeling. Side note: Any show that makes reference to “Full House,” “The Love Boat,” and “X-Men” will have me rooting for it.

Director-choreographer Michael Berresse keeps the action flowing at a smooth and rapid clip, aided by Neil Patel’s flexible set and Larry Pressgrove’s bright and bouncy music direction. “Now. Here. This.” may resemble a lecture, but at least it’s a jolly one.