NY Review: 'You Are in an Open Field' 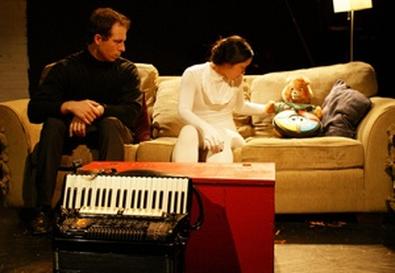 Photo Source: Anton Nickel
"You are in an open field." The very phrase probably resonates strongly with fans of Zork, an interactive computer game dating back to 1977. Some of its disciples seemed to be enjoying "You Are in an Open Field," the self-styled "hip-hoperetta" attempt to put Zork and Nerdcore hip-hop onstage, quite a lot. The rest of us are left, well, in an open field.

Not that Kevin R. Free, Marta Rainer, and Adam Smith, the players (and writers, with Eevin Hartsough), are unaccomplished or unlikable or that their text isn't clever. The hip-hop rhymes are unusual in that they actually rhyme ("Genitalia/ fail ya" alone tops anything in "Spring Awakening"), and couplets such as "Salvation only comes when you pull it from its roots/I do all the labor, and I'm demanding all my fruits" aren't stupid. Marta is the brainy Wellesley graduate who wants to breathe underwater, Kevin is the struggling artist who longs to fly, and Adam is the slightly less-intelligent Everyman with issues about burning. But that's about all we know about them. For most of the brisk one-hour running time they're just stuck in the game—obeying directives, pursuing treasures, seeking adventures and higher levels, and rebooting—and we uninitiated are struggling to make sense of it. Carl Riehl's electronic melodies and hip-hop rhythms are agreeable enough, and the trio seems to be having a marvelous time breaking each other up and ad libbing.

There's also Steven A. French as "Actor," who plays everybody they encounter, and his expressive, booming voice, quick-change personas, and delicious evil laugh suggest a major talent. Cherylynn Tsushima, the "Dancer" clad in white whose face remains covered until the very end, gracefully executes some nifty choreography by Laurie Berg, though to what purpose, again, is hard to say. I had a pretty good time at "You Are in an Open Field," considering its utter unintelligibility to those of us who don't know from Nerdcore. But the program should come with a set of instructions.