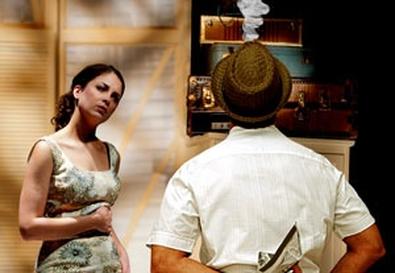 "Probation" is best viewed as playwright and director Yoshvani Medina's even-handed look at the conflicting worldviews of a Cuban exile living in Miami, Fla., and a native born and raised Cuban. The three-character play is presented in Spanish at Repertorio Español, but the theater has a new captioning system, a little screen in front of every seat that offers the option of a simultaneous written English translation.

As the play begins, two soldiers are fighting on a Cuban battlefield. One, Fredo, is dying. The other, Pancho, makes a vow: He will look after Fredo's family. Years later, Pancho (Alfonso Rey), now a wealthy businessman in Miami, brings Fredo's son, Freddy (Sandor Juan), a cartographer in his 30s, over from Cuba.

The first shocks are Pancho's. Freddy brings with him a pregnant girlfriend, Jenny (Hannia Guillén), and instead of just taking a plane and asking for asylum, he travels by speedboat and lands surreptitiously in Key West. Freddy simply doesn't know how things are done. The next shocks are Freddy's, surprised at how much the Miami exile community insists on what to think and how to behave.

The two men, though, seem to share an instinct for self-enrichment through shady business practices. Pancho sets Freddy up as the head of a health clinic of the type routinely exposed on "60 Minutes," and about halfway through the play the feds catch up with Freddy. While he is awaiting trial he debates whether or not he and his family should just return to Cuba.

The half-baked plot is told largely in a series of awkward monologues. Pancho and Freddy, for example, talk separately to the dead Fredo, a device used to fill in expository details that seems novel initially but grows tiresome.

"Probation" is more or less rescued by its first-rate cast. Rey embodies a powerful but well-meaning man who believes that he deserves gratitude and respect. Juan conveys well the ironic distance of relative youth. Guillén vacillates persuasively among flirtation, mocking intelligence, and sorrow. The scenes in which they talk to one another provide a level of intensity satisfying enough to regret that Medina didn't give them more opportunities to interact directly.