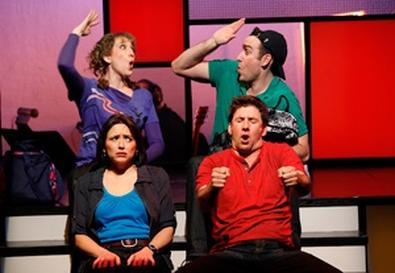 Every parent has a story to tell, and the Internet offers the perfect platform for sharing the woes of raising children. However, having a child doesn't automatically provide creative fodder for a book, a blog, or even a musical revue.

Actor and parent Sandy Rustin is making her debut as a writer with "Rated P for Parenthood," and unfortunately it shows. She clings to contrived suburban-household situations and fails to venture beyond the safety of traditional parenting issues. While these scenarios might work if the show followed one couple, the myriad partners portrayed here make the lack of diversity among the flat sketches and songs glaringly obvious.

The show progresses chronologically, detailing the trials and triumphs of parenting children from conception to college. Each scene relies on the white-bread version of parenting, with talking to your kids about sex being the most adventurous—and overdone—theme that appears. It's as if the birds and the bees is the biggest issue affecting parents today. Gay parenting also finds its way into the mix, but the writing relies on stereotypes.

The four-person ensemble alternates between portraying children and depicting parents, though some actors transition more smoothly than others. Courtney Balan and David Josefsberg are the most believable at any age, while Chris Hoch and Joanna Young seem forced as adolescents. Balan deserves a special mention, as she delicately balances humor and tenderness in every character she plays. Her voice is also the strongest of the four. There's no lack of energy onstage, but the liveliness only makes us feel that director Jeremy Dobrish is compensating for Rustin's uneven book. Rachel Bress' peppy choreography struggles to fill the stage, while Dan Lipton and David Rossmer's score toes the same generic pop line throughout.

"Rated P for Parenthood" is starkly reminiscent of a play from earlier this season, "Motherhood Out Loud," a series of monologues about parenting that had a much more adventurous take on all aspects of child rearing. Steve Capone's geometrical set design even evokes Rachel Hauck's modular backdrop for "Motherhood," however coincidentally.

Ultimately, parents may identify with the subject matter and get a kick out of the show despite its flaws. My companion, who has a young child, enjoyed it. Then again, she was also happy just to be out of the house.