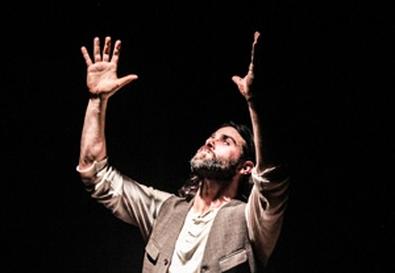 Photo Source: Michael Bernstein
The creators of the four short plays that make up "The Shelter Presents: Art" attempt to offer arguments for the necessity of art and even for its eminence as the primary human activity. The playwrights, directors, and performers involved are successful to a degree, but also to degrees they probably didn't intend. This is art about the profound virtues of art, and while "Art" ultimately makes the old point about Narcissus gazing at his reflection in the pool by headlong example, it also manages some more salient insights on its way into the drink.

In playwright Michael Sean McGuiness' well thought-out prehistoric story "Glyph," the nubile cavewoman Ooma (Tania Verafield) is courted by both the hunter Turukk (Chris Cardona) and the raconteur Moop (Alec A. Head). "When you talk, I see what you see," Ooma says of Moop, wondering which is more important to human survival: eloquence or strength. There's another difficult choice in "Mark Makes Art," an attentively written two-hander by Meghan E. Jones. Beth Jastroch and Dave Lankford convey sincere uneasiness as Karen and Michael, who are concerned about the disturbing images their young son, Mark, has been drawing since his sister's death. An intriguing debate takes shape as to whether these drawings are a healthy outlet or a sign of further psychological troubles ahead. Then there is Michael Bernstein's "Robot Girl," a brisk post-apocalyptic monologue performed with hip-hop intensity and vernacular by Olivia Killingsworth. As Robin, a graffiti artist in a world overrun by machines, Killingsworth offers up art as mankind's last flag in the ground, an instantly recognizable way for humans to announce themselves to fellow survivors.

Unfortunately, Ginger Kearns' wandering, crestfallen composition "This Is a Play About Artists" lands the back end of the evening with a thud. Kearns, an amiable performer, stars as an unnamed performance artist who uses art to work through her relationship issues. One former flame is a poet, played soundly by Michael Kingsbaker, and the two of them go round after endless round on the subjects of art and romance, leaving no stage cliché—from awkward audience participation to rave dancing in flickering strobe lights—unturned.