NY Review" 'The Taming of the Shrew' 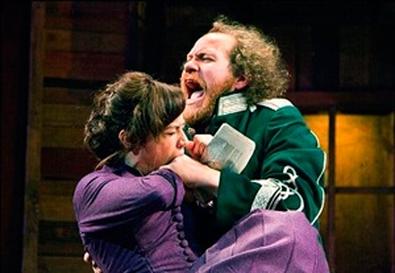 The final offering of the 2011–12 season by the ever-resourceful Theatre for a New Audience is Shakespeare's "The Taming of the Shrew," set in an American frontier town in the late 19th century. The enterprising director, Arin Arbus, has included the rarely seen "induction," which sets up a framework that has the drunken tinker, Christopher Sly, being treated to a performance of "Shrew," here given by a traveling theatrical troupe. This allows the show to begin with some broad comic strokes that seem perfectly in tune with Donyale Werle's wooden thrust setting and Michael Friedman's piano musical accompaniment, played with barroom brio by Jonathan Mastro. The way-out-West milieu lends itself easily to the knockabout elements of Shakespeare's comedy. Arbus and her cast have great fun in the early scenes in a style that is best described as rollicking.

But "Shrew" comes with a built-in problem: the "taming" of the title. It's an obstacle for the players, the audience, and especially the director, demanding the most nuanced treatment. On these shifting sands the confident production is not nearly as secure, and the application of a broad brush proves insufficient. Much depends on the chemistry of the two battling protagonists, Kate and Petruchio, and in this case the promising fireworks of their initial meeting seem to use up the romantic sparks needed for the rest of the play.

Rich Baptista (Robert Langdon Lloyd), of Padua, has two daughters: wildcat Katharina, called Kate (Maggie Siff), and the more popular Bianca (Kathryn Saffel). Among Bianca's many suitors are the elderly Gremio (John Christopher Jones) and two younger men: Hortensio (Saxon Palmer) and Bianca's favorite, Lucentio (Denis Butkus), with his servant Tranio (John Keating). Hortensio and Lucentio assume the roles of tutors to be near the object of their desire, and the games commence.

Before Bianca can marry, a husband must be found for elder sister Kate. Enter Petruchio (Andy Grotelueschen), of Verona, who has come to wive it wealthily in Padua, accompanied by his servant Grumio (John Pankow). Hortensio advises of the available Kate and the odd wooing begins, with the next Sunday set for the wedding. When Petruchio arrives for the ceremony in an outlandish costume (the witty work of Anita Yavich), the taming of Kate has started.

Grotelueschen, looking like Shakespeare himself, leads the production with his vigorous and well-spoken Petruchio. As Kate, a role that carries so many demands, Siff has but two notes, fiery and sullen, and her taming transformation is one of weary resignation, lacking any kind of sexual tension. Jones' aging suitor successfully milks many laughs, Lloyd is an upstanding Baptista, and Keating delivers his usual but pleasing eccentric self. Olwen Fouéré, as the widow of the final scene, does well with a music-hall ballad, the most suitable "Waiting at the Church."