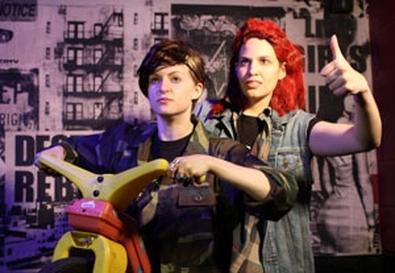 Photo Source: Thomas Blake
What can a critic even say about a play that begins by supplying its audience members with free beer and a poncho to protect them from blood splatter? On the Fly Productions' "Terminator Too: Judgment Play" is exactly what it sounds like: a lowbrow and very low-fidelity parody of director James Cameron's 1991 blockbuster film, "Terminator 2: Judgment Day." Thankfully, it's also an earnest and dumbly fun evening of theater.

Goofily written and directed by Thomas Blake, the play aims most of its jokes at the film's infamous star, Arnold Schwarzenegger, whose diversified résumé includes both bodybuilding and the governorship of California. The story of "Terminator 2" saw Schwarzenegger as a cybernetic warrior who travels back in time to protect John Connor, a teenager destined to become a military leader, from another, more advanced Terminator. Aside from setting box-office records and benchmarks for special effects, Cameron's original 1984 thriller, "The Terminator," and its epic sequel are also ingenious for using the robotic Terminator character to justify Schwarzenegger's, ahem, unique acting style.

For every performance, the cast of "Terminator Too" bravely chooses a new star from the audience, such as the charming gentleman named Xavier who stumbled through Schwarzenegger's role so winningly at the show I attended. Staged at the Santos Party House music venue in Chinatown, Blake's engaging production relies on hilariously somber video of melting action figures to re-create the film's more apocalyptic sequences and children's ride-on toys to enact the climactic chase scenes. As promised, the frequent gunshots and fisticuffs are punctuated by the slinging of copious amounts of sticky red liquid on the squealing, delighted audience.