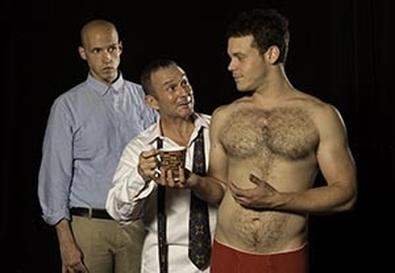 Photo Source: Richard Termine
"Oh, Jane, za days are so-o-o long." That, we are told in Richard Willett's new comedy "Tiny Bubbles," was Catherine Deneuve's reply to Jane Pauley when asked why she smokes. In this case, though, it's Willett's antic and forced play zat's long (nearly two intermissionless hours). Oh, there are glimmers of fun scattered throughout, and some interesting issues are raised. Unfortunately, the playwright seems afraid of exploring them.

Set in the Denver of today, "Tiny Bubbles" tells of what happens to two platonic gay roommates, the 50-something Danny and the 30ish Kirk, when the younger man decides to stop drinking and joins A.A. As their friendship has been predicated on their alcoholic consumption, Danny, a defiant hedonist with a penchant for martinis and old movies, starts to unravel as Kirk gets sober. Soon we are privy to two odd continuing dreams of Danny's, one placing him in full nun's habit in a very strict convent in 1965, and another in a New York City bar near Madison Avenue in 1959. They represent his warring factions of repression and indulgence. When Danny loses his job due to his drinking, he briefly gets sober alongside Kirk. But he rebels against the group strictures of A.A. and chooses to reclaim his uniqueness and what he considers a better quality of life by going back on the sauce, forcing Kirk to leave and forge a life on his own.

Willett has a point that in our highly health-conscious age people can be awfully judgmental of choices that go against the grain, but Danny is too shallow a character to explore that satisfactorily. From the get-go he clearly is a big drunk, and his behavior seriously damages his life. His relationship with Kirk is a blank, and a late declaration of love from this colorless sidekick feels awfully forced. Danny's dreams are certainly zany, but they do little to fill him in as a character. Willett gives him some standard-issue backstory (such as alcoholic parents) to deepen him, but it's dutiful and doesn't convince.

Unfortunately, Jay Alvarez's performance as Danny isn't helping. He hasn't learned the part yet, regularly stumbling over Willett's rapid-fire dialogue and killing laughs, nor has he found a way to give the character emotional weight. Tim Elliott can't do much with the underwritten Kirk, and the two men share little chemistry. The best work is being done by Amy Staats, vivid as a rebellious postulant and a hard-drinking NYC career girl longing for a husband, and Matthew Jellison, who differentiates nicely among a studly near-naked trick of Danny's, an angry A.A. compatriot of Kirk's, and a clean-cut sympathetic bartender. Maureen Kenny rounds out the company as a fascistic Reverend Mother who does a complete turnaround after Vatican II, and Kenny milks what humor she can out of the contrast.

Director Eliza Beckwith needs to speed up the many scene changes, which consist of the cast moving pieces of furniture into different configurations and were not the best idea from designer Markéta Fantová for a play that should alternate speedily between reality and fantasy. If Beckwith does that and Alvarez conquers his lines, "Tiny Bubbles" will undoubtedly play a lot better. But it's not going to be good until Willett digs deeper into his characters and makes a firm decision about what it is he wants to say.