NY Review: 'The Ugly One' 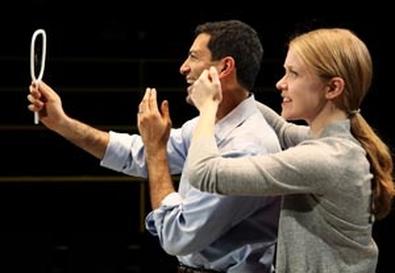 Photo Source: Julieta Cervantes
German playwright Marius von Mayenburg's 2007 play "The Ugly One" comes to New York courtesy of Soho Rep and the Play Company after having enjoyed nearly 100 productions around the world, including two at London's Royal Court Theatre. Well, to coin a phrase, better late than never. In Maja Zade's tight translation, this sharp satire on the nature of identity and the inescapable human bent for conformity is a wicked piece of japery that elegantly makes its points in one breezy hour.

Engineer Lette is upset when he discovers that his boss, Mr. Scheffler, is sending Lette's assistant, Karlmann, in his place to a convention to introduce the new high-voltage plug Lette has just invented. Pressing for a reason, Lette is stunned to be told, "Your face is unacceptable." It turns out that the engineer is unspeakably ugly, but no one, not even his wife, Fanny, has ever told him so. They just assumed he knew. So Lette goes to a plastic surgeon, also named Scheffler, for a new face. He comes out looking so great that Fanny can't keep her hands off him, women start throwing themselves at him everywhere, and he is forced by his boss to engage in an affair with 73-year-old Mrs. Fanny, head of Nukleartik, a company that wants to buy the plug. (Mrs. Fanny's gay son, another Karlmann, lusts for him too.) Things get even more complicated when plastic surgeon Scheffler starts putting the same face on other clients. As Lette's fortunes wax and wane, he becomes less and less sure of exactly who he is.

Von Mayenburg reinforces his central theme by having a single actor play each identically named character, and the lightning switches from one to another, simply but brilliantly staged by director Daniel Aukin, significantly increase the entertainment factor. Lisa Joyce is a precisely stylized hoot rolling libidinously about in an office chair as the vulgar Mrs. Fanny, then immediately segueing into Lette's demure, eager-to-please wife. Steven Boyer is hilarious flipping back and forth from intensely concentrated envy to namby-pamby passive-aggressiveness as the two Karlmanns. Andrew Garman's Schefflers share a core of dithery self-preoccupation yet are somehow always separate. As Lette, handsome Alfredo Narciso is at first an island of reason amid all the shenanigans, which works greatly to the actor's advantage when Lette succumbs to self-importance and then later starts to come apart. (Narciso handles a breakdown scene in which Lette has a dialogue with his reflection in a mirror very effectively.)

Eugene Lee's deceptively ordinary set, with its battered pieces of office furniture, scuffed linoleum flooring, and robust use of fluorescent lighting fixtures, reinforces the banality of the characters' desires, as do Theresa Squires' drab costumes and Matt Frey's bright lights. Matt Tierney's sound design is most notable during the virtuoso sequence in which Lette's operation is portrayed.

Von Mayenburg gets a bit bald at the climax, when he has Mrs. Fanny forcefully tell Lette, "Stop wanting to be different." But the play has been so delightfully inventive and engaging that we just sail right on past it.