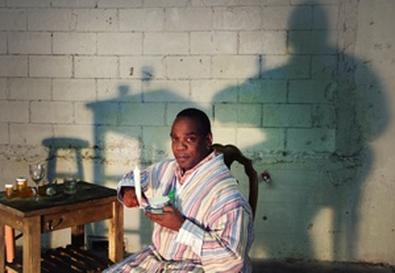 Photo Source: Wendy Strauss
There are moments in director David Herskovits' new production of Anton Chekhov's "Uncle Vanya" that crackle with emotional lucidity. Conversely, other sequences border on surreal abstraction as this new, company-created version of the 1899 classic meditates on its history. The daring combination of styles should likely prove enormously satisfying for audiences familiar with the text but may be a bit opaque for first-timers.

It's clear we're in for a nontraditional approach to the naturalistic play when Clare Barron delivers the cell-phone reminder and then introduces the character she'll be playing: the elderly Nanny N. She then joins the other members of the ensemble and "enters" the world of 19th-century Russia and the bored aristocrats assembled on a rural estate.

The opening is the only time that the performers address the audience directly, but it shrewdly sets the tone for this production, which consistently comments on the script. At times the performers repeat phrases with minor variations that sound as if they have come from different incarnations of the play. One character, the beautiful, ennui-filled Helena, is often referred to as "Helen, Helena, Yelena," a smile-inducing method of referencing the ways in which the character's name has been modified over time.

This adaptation requires performers to be both naturalistic and presentational, and the company navigates the intricate twists and turns with remarkable success. Particularly notable is Edward O'Blenis as Dr. Astrov, the physician who is repeatedly called to tend to the clan's aging patriarch. The actor nimbly turns the tics in the script into gentle comedy, even as he communicates the troubled emotional core of the character, who has found himself worn down by his profession.

As Serebryakov, Mary Neufeld combines shrill anger with petulant arrogance to terrific effect, creating a perfect complement to Greig Sargeant's sensitive and almost monotonous rendering of the title character, a man who finds himself—at 47—sadly questioning his life choices. And while Rebecca Hart's turn as Helena often feels overly strident, there is one moment of exceptional emotional vulnerability in her work: When Helena recognizes the love she feels for Astrov, Hart is heartbreaking.

The production unfolds on a stage that scenic designer Laura Jellinek has minimally but astutely outfitted. Walls covered in sheer curtains and a strip of parquet floor indicate the grand interior of the estate, while the few sticks of furniture—primarily plastic chairs—give the show a rehearsal-like quality. And like the script and performances, as well as Lenore Doxsee's lighting that uses color in an impressionistic way, Jellinek's work simultaneously invites us to become emotionally involved while keeping us at a reflective arm's-length. Target Margin has intriguingly set the stage for two more incarnations of "Vanya" that will be seen in the coming weeks: one at Soho Rep and another as part of the Lincoln Center Festival.