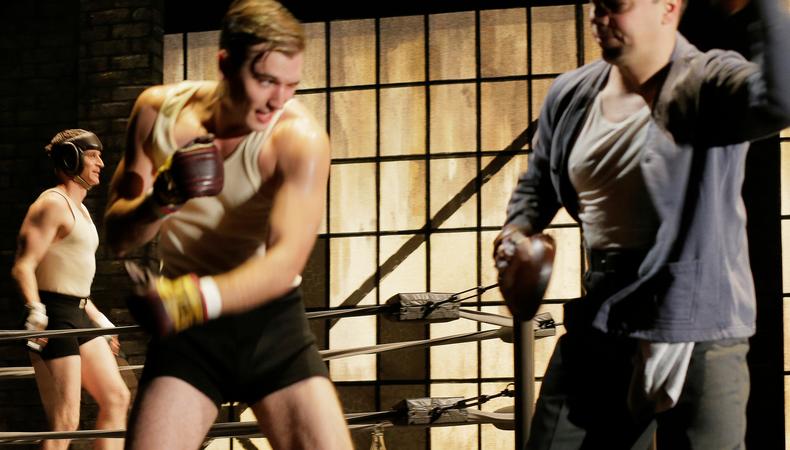 In these days of the small-cast, tidy domestic drama, what a pleasure it is to encounter Clifford Odets’ soaring, expansive, and tough-as-nails “Golden Boy,” a white-hot dissertation on the downside of the American dream. This 1937 hit blew Odets’ career wide open, and director Bartlett Sher’s immensely satisfying production roars off the stage of the Belasco Theatre (where the original debuted) with primal force. Sher, whose 2006 revival of Odets’ first hit, “Awake and Sing!,” proved a revelation, once again exhibits acute understanding of this great American playwright, who has been undervalued for far too long. “Golden Boy” is grand and glorious theater.

A sumptuously talented cast of 19 digs into the tale of would-be violinist Joe Bonaparte, who forsakes music in favor of a high-stakes career as a boxer for monetary reasons. As Joe’s loving but judgmental Italian-immigrant father watches in dismay, Joe remakes himself from a sensitive young artist into a rapacious, hard-edged fighting machine, a product for exploitation to his hard-driving manager, Tom Moody, as well as to mobster Eddie Fuseli, who muscles his way in and becomes virtually obsessed with the pugilist. There’s also Lorna Moon, the married Moody’s hard-bitten lover, a self-described “tramp from New Jersey” whose loyalty to Moody trumps the romance that blossoms between her and Joe, and the steadfast Tokio, Joe’s devoted trainer.

Joe is fueled by a rage he can neither articulate nor comprehend, and the extraordinary Seth Numrich makes that central to his knockout performance. Numrich is especially effective in clearly charting the stages of Joe’s transformation, beginning with a buoyant boyishness that eventually vanishes into a frighteningly empty, almost vicious manhood. An actor I have repeatedly admired for his emotional transparency and depth, Numrich is achingly vulnerable in a scene, shared with Danny Burstein’s eloquent, deeply felt Tokio, in which Joe realizes that he has won his shot at the championship by killing his opponent with a knockout punch.

One of the biggest challenges of Odets is his language, a cockeyed street poetry that can sound corny in the wrong hands. Sher’s company handles it expertly, so naturally that it feels inevitable yet deliciously pungent. Lincoln Center Theater has given us a formidable account of an American classic.