One Part, Many Players 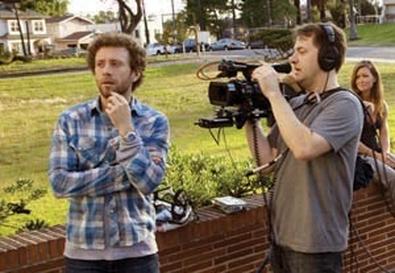 Photo Source: Douglas J. Abel
I had a problem. In the middle of my film "Shuffle"—a "Twilight Zone"–style mystery about a man who begins experiencing his life out of order—the lead actor (T.J. Thyne, roughly age 30) was going to disappear for about 12 minutes, during which time a 10-year-old version of his character would carry the film for about 11 minutes, followed by a 15-year-old version of the same character, who would anchor the film briefly until T.J. returned a minute later. Twelve minutes is a long time. I knew that I could completely lose the audience if I wasn't careful. They had to feel they were watching the same character continuously or the film wouldn't connect. How does one make that happen?

First: Get the script right. At all ages, the character must have the same speech patterns, as well as consistent word choice and cadence. He must carry the same hopes and dreams, and always be acting on them in a consistent fashion. In this case, the character was a photographer, so, even as a child, a camera was omnipresent in his possession. The structure of the introduction of these younger actors was also of great importance. In the film's opening sequence, the audience is introduced to my protagonist's age-jumping dilemma, and during this segment the 10-year-old and 15-year-old actors also playing the character are introduced briefly. By giving the audience a taste of these two actors early on, the viewers are primed for them to return for a longer period.

Second: casting. For me, the most important physical quality to match among the actors was the eyes. Eyes are the audience's main vehicle for connecting with an actor onscreen. When my casting director, Pam Pearl, brought in 10-year-old Dylan Sprayberry, he immediately bowled me over with his audition, but beyond that, I felt he possessed eyes that matched T.J.'s eyes beautifully, behind which one could feel that same internal fire—and the same went for 15-year-old Adam Raque. (We took a gag photo of T.J., Adam, and Dylan together during a hair-and-makeup test, and seeing their eyes lined up in a row was eerie.)

Third: physical hooks. T.J. has naturally curly hair, which gave us an immediate physical hook on which to hang our hat. When Taylor Black, our key hairstylist, curled Dylan's and Adam's hair to match T.J.'s, it brought another instantly identifiable element for the audience visually. In addition, the choices made by Sica Schmitz, our costume designer, brought a continuity of character that was always age-appropriate but made you instantly feel you were watching the same person.

Fourth: Let the actors watch each other. T.J. watched Dylan, who watched T.J., who was watched by Adam. As a result, small mannerisms would be shared across the performances. Some were so subtle and beautifully done that I honestly didn't see some of the connections these fine actors employed until I was editing the movie months later.

Finally: one voice. By 15 years old, a person's voice has changed to the point where it resembles his or her final adult voice. Because Adam and T.J. had very different voice qualities, I copied a trick from "Superman: The Movie" and had T.J. dub all of Adam's lines. The result is an unconscious but seamless feeling that it's the same person speaking—because it is.

"Shuffle" began playing film festivals in mid-October. At each screening, I awaited with excitement and anxiety the moment when the film is handed off from the star to the younger actors—and was thrilled to see that the audience not only went with it, but many told me afterward that they fully fell in love with the movie during that sequence. My thanks to everyone, from the actors to the crew, who made it possible to pull this off.

Kurt Kuenne is best known for his documentary "Dear Zachary" and his short "Validation." His film "Shuffle" was recently shown at the Hollywood, Heartland, and St. Louis International film festivals. For more info, go to www.shuffle­themovie.com.