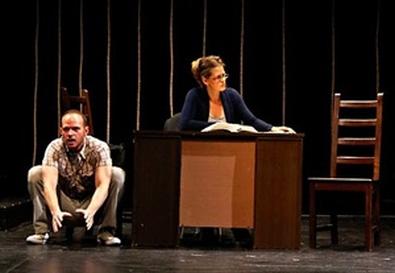 Photo Source: Ann Bartek
The moment Tom Blander gives in to his inner demon and turns the tables on his cruel boss in Christopher Stetson Boal’s play “Order,” the audience roars with approval. But what’s brilliant is what Boal does next, which is to turn Tom into a cannibalistic mass murderer. We feel queasy, not only because of Tom’s actions, but because we went along with them at first. In a play that seeks to illustrate how power seduces, it’s a splendid act of subversive dramatization.

The rest of the play, produced by Oberon Theatre Ensemble, is less successful. Hopping back and forth between black comedy and a “Twilight Zone” episode, it alternately challenges us with its boldness and frustrates us by pursuing so many ideas in its quick 90 minutes that it can’t give any of them the full attention they deserve.

Tom is a former professor of philosophy whose life is being squeezed out of him. His boss Adam constantly humiliates him; his wife, Maisie, blames him for their dying marriage; and his friend Joe pesters him to get a new job. Even Dr. Fine, his therapist, gives him a hard time over his belief that people are inherently good, despite all evidence in Tom’s life to the contrary. Tom believes he’s becoming possessed by a demon who speaks to him in his dreams—and in fact he is. The demon, whom we can see and hear, is a rather ordinary-looking fellow named Bathug, who precipitates Tom’s evolution from doormat to serial killer.

Austin Pendleton’s direction is masterful. He elicits tight, natural performances from actors playing characters who grow increasingly unnatural. He paves over patchy spots when the play switches between naturalism, fantasy, and absurdity. His staging of the wildly diverse deaths of Maisie and Dr. Fine is an example of how to turn a knotty script problem into a production strength.

Ryan Tramont’s transformation of Tom from repressed intellectual to power-hungry cannibal is both believable and chilling. Mac Brydon is delicious as Adam, Brad Fryman is delightful as Dr. Fine, and Gabe Bettio delivers the freshest portrait of a demon I’ve seen in years.

Because “Order” is running in rep with “Othello,” designer Ann Bartek has had to create economical and changeable sets. At first glance, the row of ropes she’s hung along the back of the set seems more suited to Shakespeare than Boal, but after a while it comes to resemble a skeletal wall through which the living and the dead pass, a wonderful if unintentional idea.

“Order” wins points for originality, audacious theatricality, and brave and talented playwriting. It has upped the bar for plays and films about demons, which may be bad news for Hollywood, but it’s good news for us.