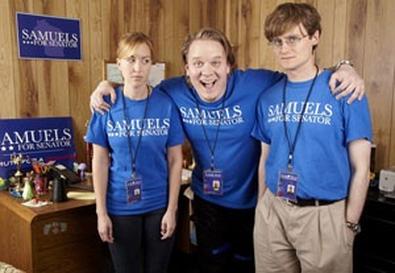 Over the next few months, YouTube, Netflix and Hulu will roll out their most ambitious original programming yet — a digital push into a traditional television business that has money, a bevy of stars and a bold attitude of reinvention.

The long-predicted collision between Internet video and broadcast television is finally under way.

No one is suggesting that the quality on the Internet is close to that of broadcast TV, but it's becoming easy to imagine a day when it will be.

And even though critics question whether new media can rival a business that's been around for about 70 years, the video sites have sought partnerships with seasoned professionals. And they benefit from the different economics of global Web-based entertainment.

Either way, what's happening now is just the first wave.

"This convergence is now," says documentary filmmaker Morgan Spurlock, who created "The Failure Club," a series about people trying to do the things they've always feared, for Yahoo, and "A Day in the Life," a series documenting 24 hours of someone's life, for Hulu.

He says the quality still varies, but viewers will soon see talent and production values begin to change.

On Feb. 6, Netflix will premiere its first scripted show, "Lilyhammer," in which Steve Van Zandt ("The Sopranos") plays a New York mobster in witness protection in Norway. Later this year, it will release "House of Cards," a highly anticipated adaptation of the British miniseries produced by David Fincher and starring Kevin Spacey. Next year, it will debut new episodes of the cultish comedy "Arrested Development," which originally aired on Fox.

Hulu plans a Feb. 14 premiere for "Battleground," a mock political documentary. The site will later release "Up to Speed," a six-part documentary by Richard Linklater about "monumentally ignored monuments of American cities."

Hulu, which has some 30 million monthly users and 1.5 million for its monthly subscription service Hulu Plus, is co-owned by the parent companies of NBC, Fox and ABC.

Yahoo has sought to capitalize on its enormous search audience of nearly 180 million unique monthly visitors by drawing viewers to its original programming, including a slate of women-focused shows launched last fall and comedy programming planned for February. Its first scripted entry will be "Electric City," a futuristic animated series produced by Tom Hanks, who will also voice a character.

YouTube recently launched an entire catalog of original programming, spending $100 million on the gradual rollout of more than 100 niche-oriented channels.

The channels don't have the pressures of a 24-hour schedule and instead focus on short-form, on-demand programming. Partners vary from the Wall Street Journal to World Wrestling Entertainment to Madonna.

At the recent consumer electronics trade show CES, YouTube's global head of content predicted that by 2020 about 75 percent of channels will be transmitted by the Internet. And video will soon be 90 percent of all traffic.

"Over time, you will see more and more television properties, television channels distributed over the Internet," Robert Kyncl said. "Everything in its due time."

Internet delivery allows programming that is "much harder to fulfill through traditional distribution means...because we have a global scale," Kyncl added.

And online systems can serve niche audiences that would be difficult to sustain any other way, and do so at lower cost.

YouTube plans to expand to hundreds of Internet channels, just as television went from a few networks to dozens of cable channels. In the next few years, "most of your interests will have channels on YouTube," Kyncl predicts.

Netflix, which streamed 2 billion hours of video in the fourth quarter of 2011, is already operating under the assumption that video networks — whether streaming or televised — are converging. Just as Web video is undertaking original programming, TV networks are experimenting with systems such as TV Everywhere, which allows viewers to watch channels on the Web and on mobile devices.

"You can think of us as a cable-TV network, but we like to think we are at the center," says Reed Hastings, CEO of Netflix. "We are an Internet TV network, and then they are going to become like us. But it's the same thing, really."

Production schedules will vary widely at the sites, but Netflix plans one notable difference: All its episodes will be released at once.

James McQuivey, an analyst at Forrester Research, says the fact that Hanks is making a series for the Internet shows how the traditional TV system is "ready to unravel.

McQuivey says the disruption in video will "unfold in front of us like a slow-mo replay of an accident."

Hulu and Netflix both want to use original content to entice viewers to their much larger libraries of older content. For Netflix, that's movies and old TV; for Hulu, that's last night's TV and older series. Hulu executives say any new original series has to be match up to traditional content.

"If you're ever going to do anything original, it's got to stand up to that," says Andy Forssell, senior vice president of content at Hulu. "That can't be 'Web video,' it's got to be TV quality."

Original content remains a small percentage of the budget for Hulu, which plans to spend $500 million on content in 2012.

Erin McPherson, head of original programming at Yahoo, likes to call Yahoo "the fifth network." Its Yahoo Studios production house in Los Angeles produces as many as 30 originals a month, often partnering with production companies such as Reveille (NBC's "The Office"). Its original programming attracted more than 26 million unique visitors in November, according to comScore.