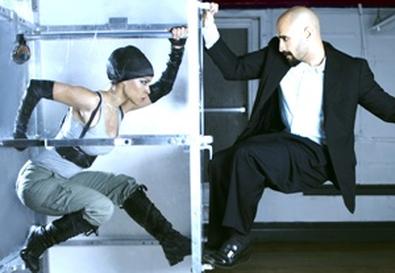 Photo Source: Marius Chira
An unusual blend of physical theater, science fiction, and political parable, "The Orphans" is notable not so much for its literary qualities as for its sinuous physical expressiveness. Karina Casiano wears a lot of hats here—she's the writer, director, and half of the cast, along with the dynamic Daniel Irizarry—but she also has the chops and clarity of vision to pull it off.

Most dystopian stories feature an oppressive totalitarian state whose fingers reach into every aspect of private life. "The Orphans" twists the formula (and sticks it to the Tea Party and other free-market absolutists) by portraying a nightmarish laissez-faire New York in which even air and water are under corporate control. The story concerns a recently laid-off pharmaceutical salesman (Irizarry) who joins an underground militia; his contact is Casiano, who strikes alarming poses and spouts militant rhetoric from inside a kind of isolation chamber made from an old phone booth. Eventually, their boundaries crumble, and the two become lovers, until news of a popular uprising intrudes upon their idyll.

The show's politics are worn more lightly than I'm making it sound. In one sense, this is a highly romantic, even old-fashioned tale whose theme of personal happiness versus social commitment is not a million miles away from "Casablanca." For a couple of revolutionaries, they show little interest in words or ideas; everything significant is conveyed through graceful, stylized, and seemingly gravity-defying movement. The centerpiece is a sensitive but erotically charged pas de deux that affirms both the humanity at the story's center and the pleasure of watching beautiful bodies in motion.