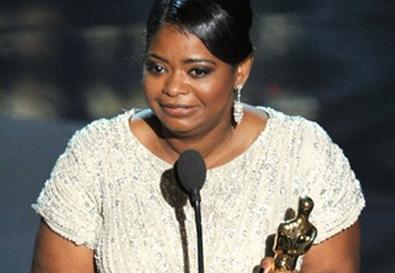 Photo Source: Getty Images
When the evening's biggest shock is Meryl Streep winning Best Actress, you know it's a predictable Oscar ceremony. Streep had been neck-in-neck with "The Help" star Viola Davis all awards season, with Davis predicted by most outlets (Back Stage included) to win the statuette at the 84th annual Academy Awards on Sunday night. But in the end, "The Iron Lady" star pulled off the win and likely caused many viewers to gasp for the first time all night.

Sure, some will still maintain that George Clooney was the frontrunner for Best Actor in "The Descendants," but they're kidding themselves. If Jean Dujardin wasn't a lock after winning the SAG Award for "The Artist," his win at the BAFTAs sealed it. Both voting bodies share many voters with the Academy, and there's no precedent for an actor winning both precursors than losing the Oscar. But Clooney is Clooney, and many people were certain he would pull off the win—especially after embarking on a press tour in the last few weeks that left no magazine cover unturned.

But the truth is, we've known for a while it would be Dujardin—just as it has been known for months that Octavia Spencer of "The Help" and Christopher Plummer of "Beginners" would win in the supporting categories and "The Artist" would take Best Picture and Best Director. After weeks of watching the same people pick up awards at the Golden Globes, the SAG Awards, and Saturday's Spirit Awards, there were few things left to chance.

But if the winners couldn't surprise us, it would have been nice if the show could have. Every year there's the same complaints about the show's tone and run time, yet nothing ever changes. Maybe hiring Brett Ratner to produce wasn't a great idea, and it's probably best that he stepped down after his controversial comments, but one has to wonder about the show that could have been. The Academy made such a brouhaha over "Hugo" star Sacha Baron Cohen planning to attend the ceremony as General Shabazz Aladeen, his alter ego from "The Dictator," when they should have embraced the opportunity. His video response to the Academy last week was pure genius, and such humor would have been welcome in the broadcast. And Cohen did walk the red carpet in character, and provided one of the funniest moments when the general "accidentally" spilled an urn he claimed contained the ashes of Kim Jong-Il. Isn't that more entertaining than the forced banter between presenters Jennifer Lopez and Cameron Diaz?

As for the host they did end up with, Billy Crystal, he appeared determined to rely on his earlier glory days as host. We should have known what to expect when the first Oscar commercials began airing; in the one featuring Megan Fox and Josh Duhamel hunting Crystal down, the message was clear: I'm here to save you. But Crystal seemed the only one wanting to live in the past, beginning with his blatant dye job, as he went about rehashing the same bits—appearing in clips from the nominated films and singing an introductory song about each Best Picture nominee. But in the past, the songs have been clever plays on popular tunes; this year, it was difficult to figure out just what he was parodying as they all blended together into one tone deaf number. Things didn't improve: the smug smile after certain jokes, the attitude that if you weren't laughing, you didn't get it and the fact that the show referenced his own movies ("When Harry Met Sally" capped off one montage while "The Princess Bride" also got airtime) all lent to the self-congratulatory air. Maybe that's appropriate on Hollywood's night of self-congratulation, but when Spencer's speech is cut short to get back to another of Crystal's bits, it wears thin fast.

If nothing else, the evening gave birth two new stars, now with their own Twitter accounts. Keep an eye out on JLosNipple and Angiesrightleg; they provided some of the most entertaining banter of the evening.